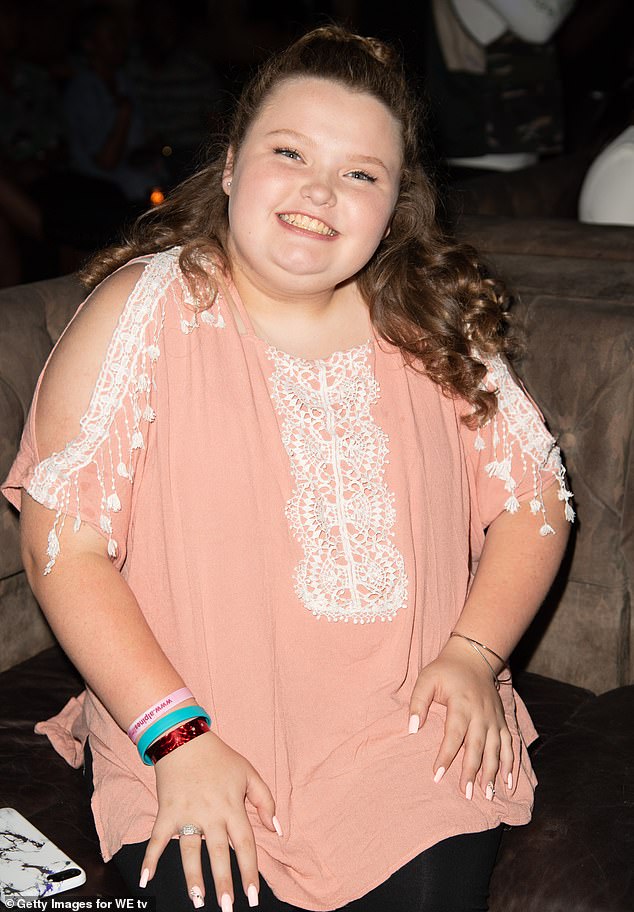 The battle for custody of Alana ‘Honey Boo Boo’ Thompson is over.

The 16-year-old reality star was the center of a heated contest between her mother, Mama June Shannon, 42 and the teen’s older sister, Lauryn Efird, 22.

Lauryn, also known as Pumpkin, was awarded permanent custody of the Here Comes Honey Boo Boo star, according to The Sun which claimed to look at court papers filed in Georgia.

Custody battle: The custody battle over Alana ‘Honey Boo Boo” Thompson is over. The reality star, 16, will live with her older sister, Lauryn, aka Pumpkin, 22

The final ruling was handed down in April.

Testimony from the hearing revealed the former Toddlers And Tiaras cast member had been living with Lauryn and her husband, Josh Efird, 25, since 2019.

The Mama June: From Not to Hot star will be allowed visitations, with permission from Lauryn, and must provide $800 a month in child support payments until Alana turns 18.

Staying put: Court papers revealed that the Here Comes Honey Boo Boo star had been living with her older sister and her family since 2019. Pictured NY February 2017

Addiction: Mama June Shannon, 42, lost custody of her daughter after being arrested on drug charges in March 2019. The reality star entered rehab and said she has been sober for almost two years.  Pictured NY June 2018

June lost custody of the teen in 2019 after she and former boyfriend, Geno Doak, 49, were arrested on drug charges.

The former stage mom hit rock bottom and sold her home at a loss in order to get some fast cash. When the money was gone, the beauty pageant veteran claimed she lived in her car before she entered rehab.

Pumpkin received temporary custody in August of that year, and the teen has been living with her ever since. Court documents show both sides agreed to the arrangement.

The custody decision is not the only change to the Efirds’ growing household.

This news comes after it was announced that June is a married woman.

The star has secretly tied the knot with boyfriend Justin Stroud, 34, in Georgia, after just a few months of dating, it was learned this week.

In a selfie posted by the star, Mama June is seen smiling with her other half as she flashes a giant diamond ring.

The Shannon family matriarch is said to have wed her younger beau at a Georgia courthouse on March 23, The Sun reported.

Mama June is MARRIED! Reality star, 42, secretly ties the knot with boyfriend Justin Stroud, 34, in Georgia (the couple pictured above on Instagram)

Although June and her younger beau have only been dating for a few months, they sparked engagement rumors in March this year when they spotted shopping for rings together at a jewelry store in Alabama.

The relationship comes after June ended her troubled romance with Doak.

In a recent interview with The Sun, June gushed over her man Justin: ‘We’ve known each other going on a year now. We were best friends and we decided to take it to the next step in the last eight months.’

Happy: Mama certainly has reason to smile again after finding love with Justin (Pictured above on a recent TikTok post)

A walk in the park: Mama and her man Justin are seen having a romantic stroll in LA in January this year

It has been reported that Justin was issued with an arrest warrant last October after he violated his probation on drug and burglary charges – and was eventually arrested in Florida.

The pair were not legally married but did have a commitment ceremony together.