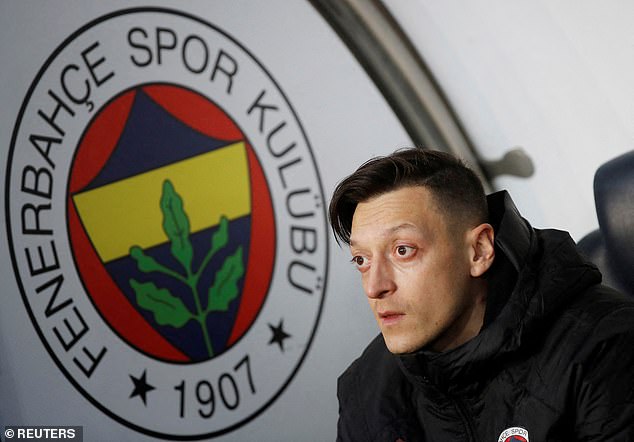 Mesut Ozil has stated he has no plans to leave Fenerbahce and that he is determined to retire at his ‘childhood’ club despite being excluded from the squad since March.

Ozil – who still has two years remaining on his contract – hasn’t featured for Fenerbahce since he was suspended and has subsequently missed eight league games.

The former Arsenal midfielder was involved in a verbal altercation with manager Ismail Kartal during their victory against Konyaspor and has been frozen out of the squad ever since.

Ozil has taken to Twitter to share his thoughts on the situation and commit his future to Fenerbahce.

‘Recently, I have had to make a statement regarding the allegations made about my career,’ tweeted Ozil on Tuesday. ‘I had completed my career goal by signing a 3.5-year contract with Fenerbahce, my childhood love, without even getting paid for the first 6 months.

‘I repeat with emphasis; I will not end my career in a team other than Fenerbahce. For the duration of my contract, my only goal is to sweat our Cubuklu jersey. This decision is very clear and final.

‘As per the requirements of professional life, if our management takes a decision about me, I will only respect this attitude. I will work hard and always keep myself ready. As I always say, the main thing is Fenerbahce. With my love and respect to the great Fenerbahce fans.’

Ozil had enjoyed a successful spell at Fenerbahce prior to his suspension. He had scored nine goals and registered two assists for the Turkish side.

However, things turned sour after the 33-year-old fell out with Kartal during their triumph over Konyaspor in March.

This is not the first time Ozil has been frozen out of a squad. He was cut out of the picture by Mikel Arteta following Project Restart and did not feature again until his move to Fenerbahce.

However, the 33-year-old fell out of favour under current Arsenal manager Mikel Arteta

Ozil joined the Turkish side after his £350,000-a-week Gunners contract was terminated. It brought an end to his long and controversial spell in north London.

During his time at the club he won three FA Cups and one Community Shield following his arrival in a then club-record £42.5million deal from Real Madrid under Arsene Wenger.

Ozil left Arsenal having played 254 matches for the club, scoring 44 goals and recording 77 assists in more than seven years.

He was named the club’s Player of the Season in 2015-16, when they finished second in the Premier League to Leicester City.

Ozil was also named the PFA Fans’ Player of the Month on three separate occasions in 2015.

Additionally, the playmaker was involved in the 2014 FA Cup final victory against Hull City, which ended Arsenal’s nine-year trophy drought, as well as when they defended their Cup crown against Villa a year later.