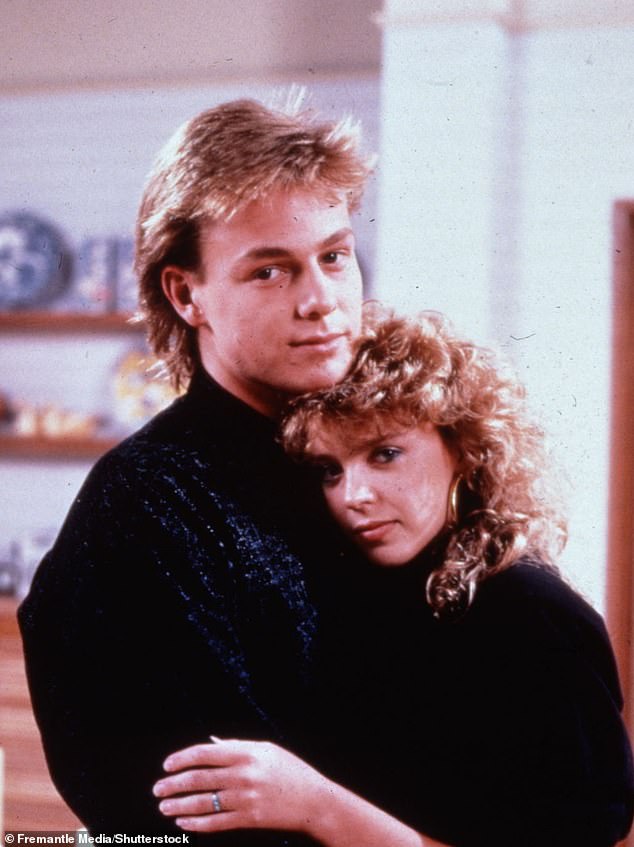 Neighbours executive producer Jason Herbison has hinted Kylie Minogue and Jason Donovan might have a bigger role in the finale than first reported.

Speaking to The Herald Sun on Wednesday, Jason said the recent leak didn’t fully explain the ’80s golden couple’s storyline in the episode.

‘What I’ve read is not what happens which is great. It hasn’t come out yet,’ said Herbison.

Coming home: A Neighbours producer has confirmed Kylie Minogue and Jason Donovan (both pictured) could be set for a bigger role in the soap’s finale

Jason kept tight-lipped about the details of their appearance but he called the pair ‘wonderful’ adding it was ’emotional’ for them.

‘Seeing Kylie back as Charlene was quite a moment. Very special and I think for them too it was a real full circle for them,’ he told the publication.

Kylie and Jason’s wedding on the series 34-years ago was watched by 22 million people across Australia and the UK.

Kylie’s decision to return to the soap following her phenomenal music career was met with praise from fans.

Confirmation: ‘What I’ve read is not what happens which is great. It hasn’t come out yet,’ Neighbours EP Jason Herbison (pictured) confirmed to the publication

Back to her roots: ‘Seeing Kylie back as Charlene was quite a moment. Very special and I think for them too it was a real full circle for them,’ Jason said. Here: Kylie at Cannes

Last month, a leaked script revealed the fate of ’80s lovebirds Charlene and Scott as they return to the Aussie soap for its final episode.

The couple will return to Erinsborough at the end of the episode and deliver the closing lines, according to Popbitch.

The wedding of Scott and Charlene is considered a significant cultural moment of the late 1980s, and is fondly remembered by Brits and Aussies.

Kylie and Jason, who were dating in real life at the time, were household names in both countries, and would each go on to launch music careers in the UK.

Their on-screen relationship began after Scott mistook Charlene for an intruder at his neighbour Madge Ramsay’s house, before eventually learning she was Madge’s daughter.

After getting married, the pair left Erinsborough and moved to Brisbane.

Kylie quit Neighbours in June 1988, having become the first person to win four Logie Awards in one year and the youngest ever recipient of a Gold Logie.

Iconic: The young couple’s wedding on Neighbours was watched by two million Australians on July 1, 1987. Their union was an even bigger attraction when it aired in the UK a year later, drawing 19.6 million viewers, making it Britain’s third most-watched show of 1988