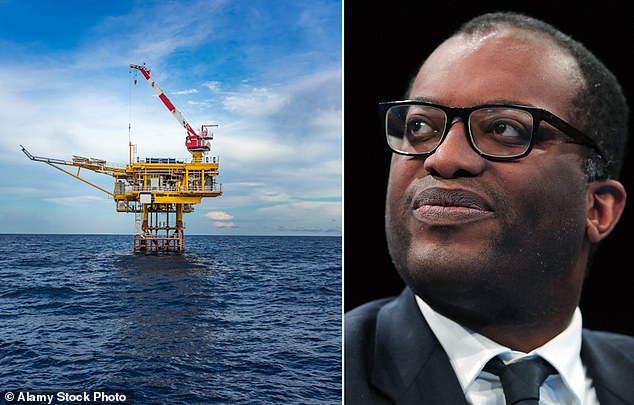 By Lucy White And Colin Fernandez For The Daily Mail

A new gas field in the North Sea has finally been given the thumbs up by regulators in a move Business Secretary Kwasi Kwarteng claimed will ‘protect energy security’.

The Jackdaw field, east of Aberdeen, is owned by Shell and was originally licensed in 1970.

Last year the Government refused permission to develop it amid opposition from green activists who were pressuring ministers to reduce Britain’s reliance on fossil fuels.

But that decision was called into question following Russia’s brutal invasion of Ukraine, which has caused gas prices to soar as countries shun supplies from the Kremlin.

Shell submitted an amended plan for Jackdaw earlier this year, and urged the Government to approve it to help ease Europe’s energy crisis.

At the time, the oil giant’s chief executive Ben van Beurden said: ‘It will be a tough winter if we don’t have any Russian molecules coming into Europe. That’s the only thing I can say with any certainty.’

Kwarteng confirmed yesterday that environmental regulator Opred has given Shell’s plans the green light and tweeted: ‘Let’s source more of the gas we need from British waters to protect energy security.’

Shell said the field has potential to produce 6.5 per cent of Britain’s gas output ‘at a time when UK energy security is critically required’ and will result in £500m investment in the UK. The new plan changes the way it processes gas at the Shearwater hub, to which the Jackdaw field will be connected.

Rather than removing all naturally occurring CO2 from the gas offshore, some of it will be exported to the onshore St Fergus terminal where it will be further treated.

It is thought that the gas field has reserves of between 120m and 250m barrels of oil equivalent, and Shell plans to start production in the second half of 2025.

However, Ami McCarthy, of Greenpeace UK, said yesterday: ‘Approving Jackdaw is a desperate and destructive decision from [Boris] Johnson’s government, and proves there’s no long-term plan.’