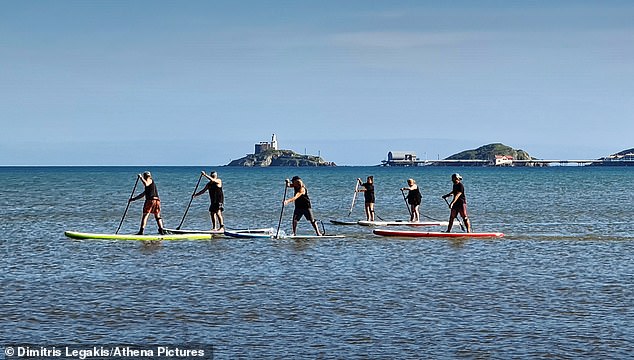 Toxic water fears put us off wild dips: More than half of swimmers avoid rivers or seas amid health concerns over dumping of sewage, survey shows

By Colin Fernandez For The Daily Mail

The majority of Britons fear swimming in seas or rivers because they are worried about pollution.

Environmental charity Surfers Against Sewage found that 52 per cent of people were scared of swimming in wild British waters.

Nearly a quarter said they avoided them entirely due to fears water companies were dumping raw sewage there.

Chief executive Hugo Tagholm said the water industry needed to ‘cut this c**p’ so swimmers can ‘enjoy the experience’.

Nearly one in four Britons (24 per cent) say they are avoiding swimming in UK waters due to the sewage scandal – water companies allowing sewage to flow into rivers and seas rather than treating it.

More than half of Britons avoid swimming in the nation’s seas or rivers due to health concerns over dumping of waste, according to a survey by Surfers Against Sewage. Pictured: Paddleboarders in Swansea Bay, Wales

An overwhelming majority (74 per cent) of the public agree that sewage pollution is a real issue in UK waters, with almost half (45 per cent) having become aware in the last year of the risks associated with swimming in UK waters.

The survey found a fifth of Britons (21 per cent) said they or someone they know has fallen ill after swimming in UK rivers and seas, most notably with an ear infection (10 per cent) or diarrhoea (9 per cent).

The younger generation (aged between 18-34) are most at risk as the most likely age group to brave the UK’s open water, with two fifths having tried wild swimming or water sports.

Almost a third (31 per cent) of Brits believe water companies are violating the public’s right to a safe, clean and healthy environment.

Over half (55 per cent) believe funding for improvements to sewage infrastructure to combat pollution should come from water companies’ profits.

This Jubilee weekend thousands of Brits are expected to take to the water.

SAS has launched a free phone app, the Safer Seas & River Service, which offers a real-time sewage pollution alert service for people to check whether it is safe to take a dip.

Mr Tagholm said: ‘This Jubilee weekend, the public will flock to our amazing coastlines and rivers to enjoy the water and all the health and wellbeing benefits that taking a dip provides.

‘It is clear the UK public are fearful about swimming due to the amount of raw sewage being discharged into waterways, and believe the water industry must cut this c**p.

‘The public need a service to check for sewage pollution before entering the water, so they can enjoy the experience without worrying about getting sick.

‘Surfers Against Sewage is proud to have pioneered the provision of real-time water quality information, through the Safer Seas & Rivers Service, which alerts users to sewage and agricultural pollution as and when it happens at hundreds of beaches and rivers nationwide.

‘This helps surfers, swimmers and beach-lovers avoid polluted water and all the potential dangers it carries.’

Surfers Against Sewage have launched a free phone app, the Safer Seas & River Service, which offers a real-time sewage pollution alert service for people to check whether it is safe to take a dip. Pictured: Wastewater discharged in the Swale from paper mills in Kent

Pam Spychal, wild swimmer and SSRS user from Norfolk, commented: ‘I started wild swimming during the pandemic and love it. It brings me immense joy and connects me to nature and myself. I have noticed the smell of sewage around me as I bathe and every time it rains there is a sewage outflow at local beaches.

‘That’s why I check the Safer Seas & Rivers Service app whenever I am heading for a swim, and I use the platform to contact our local water company and MP about the issue.

‘I’m grateful to Surfers Against Sewage for providing this free service and protecting us swimmers but it shouldn’t be necessary – water companies and government must end sewage pollution.’

The sewage scandal has meant UK rivers are in a particularly bad state, with only 14 per cent deemed to have ‘good’ ecological status.

There are over 600 designated bathing waters in the UK but only two are located in rivers, meaning rivers are not subject to the same monitoring as many coastal waters. As a result, public information on water quality is limited.

The Safer Seas & Rivers Service is currently only able to cover 8 river bathing sites, despite rivers being public favourites for swimming and water sports.