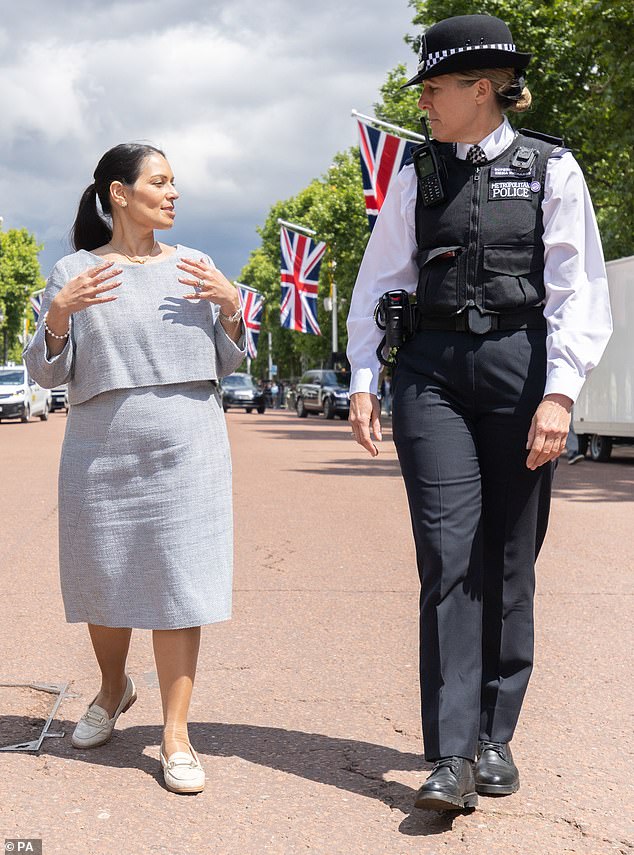 Allies of Boris Johnson have accused MPs trying to topple him of being ‘self-indulgent, narcissistic and contemptuous’ – as Priti Patel led Cabinet ministers in rallying around the PM and told plotters to ‘forget it’.

Tory rebels think they could get enough support for a confidence vote next week, and the Prime Minister is said to be increasingly frustrated with open rebellion among some Tory politicians.

But the Home Secretary has warned MPs that voters will not forgive the party if it descends into civil war instead of tackling issues such as the cost of living crisis.

In an interview with the Daily Mail, she denounced those writing no confidence letters as creating a ‘sideshow’ rather than finding solutions.

But the PM believes he will survive a confidence vote, it is understood, and some Cabinet ministers privately want him to ‘force the issue’ by holding a vote ahead of two by-elections on June 23 to limit the number of rebels.

One Cabinet minister told the Times: ‘He doesn’t care whether he wins by 100 or 10. He will plough on. Colleagues are frothing at the mouth in a way the public is not.’

Mr Johnson asked what the ‘point’ of a vote would be while discussing the issue with colleagues, and one ally said: ‘There’s no alternative strategy, no alternative plan, no big ideological divide.

‘MPs have been telling us for weeks that we need to focus on cost of living pressures.

‘Would it not be the most self-indulgent, narcissistic and contemptuous thing to decide that now is the time for another three months of Conservative navel-gazing?’

Culture Secretary Nadine Dorries warned a challenge would be an ‘indulgence’ as she accused plotters of doing Labour’s work for them.

Deputy Prime Minister Dominic Raab said the ‘vast majority’ of Tories want Mr Johnson to ‘get on with the job’ as he rejected claims the rebels have the numbers to remove him.

And Jacob Rees-Mogg, the Brexit opportunities minister, said the PM should not resign as ‘the country is lucky to have him’.

Their support came just a day after Dame Andrea Leadsom criticised the PM over Partygate while MP John Stevenson announced he was writing a letter of no confidence.

On a visit to The Mall yesterday to see police preparations for the Jubilee, Miss Patel urged her Tory colleagues not to overshadow the celebrations with rows over leadership.

‘Events like this are about celebrating our country, our nation, our values, and our monarchy. This is about Her Majesty the Queen – I think that’s where all the focus should be,’ she told the Mail.

‘Just coming here, the mood, you can see the heart and soul of the nation will be lifted. This weekend is going to be all about the long-standing dedicated service that Her Majesty the Queen has given that nation. Everyone should rally behind that.’

Miss Patel urged Tory rebels and those who see themselves as leadership contenders to stop creating a distraction, adding: ‘Our job is to deliver for the people. End of story.

‘This isn’t about a parade [of leadership candidates] or a contest or letters. We need to concentrate on doing our jobs. Look at what is going on in the world right now, look at the challenges that we face domestically. We can’t ignore those.

‘Writing letters is a sideshow, quite frankly, rather than focusing on the real challenges that we have to find solutions to.’

She urged MPs wanting to get rid of Mr Johnson to ‘forget it’ as she praised his role on the international stage. ‘Look at our standing in the world when it comes to Russia and Ukraine,’ she said. ‘Look at the leadership that has been provided.

‘Our job is to deliver on the people’s priorities. They won’t thank the Conservative Party for talking about itself at a time when people have anxieties, concerns, apprehensions. Our job is deliver for them.’

Miss Patel urged Tory rebels and those who see themselves as leadership contenders to stop creating a distraction. Pictured yesterday in Green Park, London

Under Conservative Party rules, Mr Johnson will face a confidence vote if 54 Tory MPs write to Sir Graham Brady, the chairman of the 1922 committee, demanding one.

Critics would then need more than half of the party’s MPs to support removing him.

Mr Raab yesterday said he did not believe a vote will be triggered next week as he ‘doubts’ there are even 40 letters in. He also dismissed suggestions Mr Johnson could call an early election as ‘highly unlikely’.

Mrs Dorries also claimed efforts to topple Mr Johnson were being co-ordinated by a handful of ambitious individuals. Asked who was behind the campaign, she told BBC Radio 4 she had ‘no idea’ but said ‘the overwhelming number’ of Conservative MPs back the PM.

In an article for the Politics Home website, Tobias Ellwood said the Brexit deal had ‘strangled’ industry. He added that economic challenges ‘would disappear’ if a softer model was used.