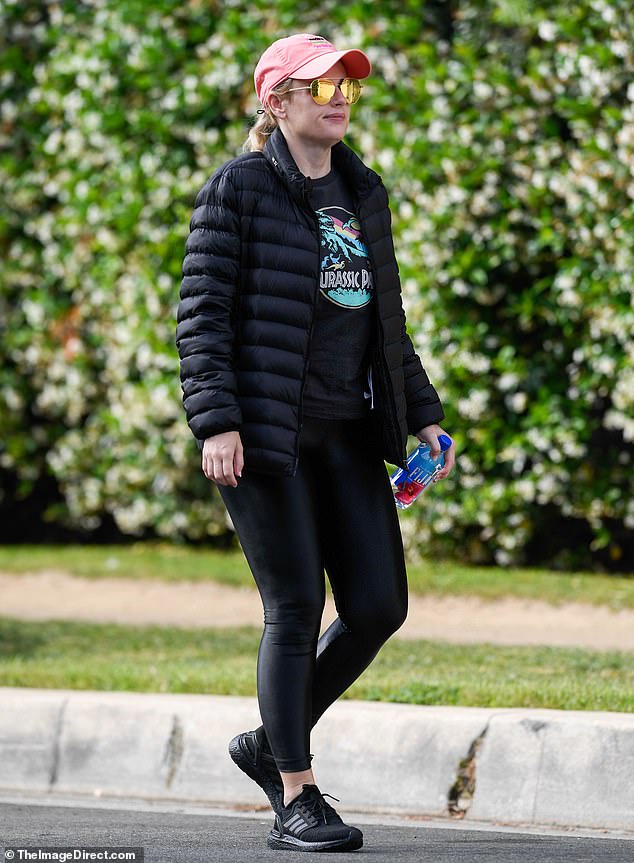 By Jo Scrimshire For Daily Mail Australia and Bang Showbiz

She’s on cloud nine after finding love with a mystery man.

And Rebel Wilson may well have been chatting to her new boyfriend as she spoke on the phone while on a morning hike in Los Angeles on Tuesday.

Getting her steps in: Rebel Wilson wore a vintage Jurassic Park T-shirt and shiny black leggings as she went for a hike in Los Angeles on Tuesday morning

She completed her look with reflective aviator sunglasses and a pink cap.

Rebel’s outfit drew attention to her recent weight loss, after she shed a whopping 80lbs (36kg) since embarking on a health kick in 2020.

She has attributed her dramatic slim-down to daily walks.

The Aussie comedian recently confirmed she was ‘happily in a relationship’.

Rebel, who previously had little luck on dating apps, was introduced to her new partner through a mutual friend who thought they ‘would hit it off’.

While she did not reveal the man’s identity, she revealed on the U Up? podcast that things were already getting serious for the couple.

‘I am now happily in a relationship… I met them at a friend’s set-up,’ Rebel told hosts Jordana Abraham and Jared Freid.

Happy ending: The Aussie comedian (pictured in West Hollywood on May 10, 2022) recently confirmed she was ‘happily in a relationship’

‘He had known both of us for at least five years and he thought we would hit it off – and then we did!

‘I think that escalates things quicker, meeting someone from a trusted source. I can trust that they are who they say they are, which is something that you don’t really know on the apps.’

The How to Be Single star also spoke about the process to get there, which included ‘dating 50 people in one year’ for practice.

Set up: The Pitch Perfect star, who previously dated billionaire Jacob Busch, was introduced to her new partner through a mutual friend who thought they would ‘hit it off’. (Rebel and Jacob – pictured here in September 2020 – dated for about a year until February 2021)

Rebel explained: ‘I think I went out with about 50 people in that one year, but some of them were just one date and then you think, “Oh, no.”

‘I deliberately wanted to push myself to date a bunch of people and gain that experience, which I know is not normal, but it really helped me find out what I liked and what I didn’t like.

‘It was a fun thing and I don’t think anybody got hurt by it or anything and nobody else knew – just me and my close friends.’

Practice: Before meeting her boyfriend, Rebel ‘dated 50 people in one year’ for practice. (Pictured at the Vanity Fair Oscar Party in Beverly Hills on March 27, 2022)