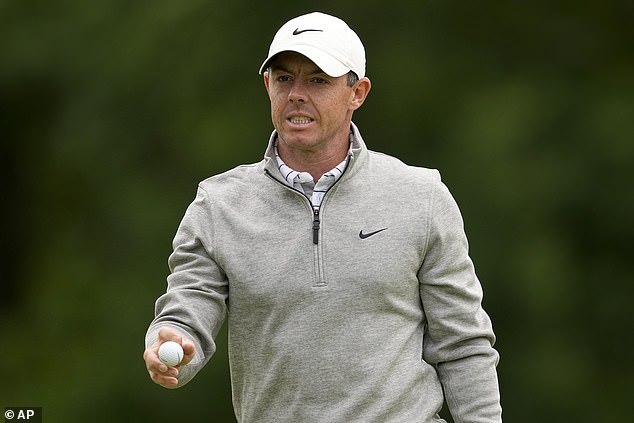 ‘The field’s nothing to jump up and down about’: Rory McIlroy insists he is ‘indifferent’ about the line-up for first event of big-money rebel Saudi golf tour at Centurion… even after former world No 1 Dustin Johnson signed up

Rory McIlroy insists he is ‘indifferent’ about the line-up for the first event of the controversial Saudi golf league – after former world No 1 Dustin Johnson surprisingly signed up to the competition.

Johnson, a two-time major champion now No 13 in the world, is the highest-ranked player and jewel in the crown of a field that currently includes 26 of the top 150 players in the world for the event at Centurion.

Asked his opinion on the line-up ahead of playing in the Memorial Tournament this week, McIlroy said: ‘I’d say indifferent is probably the way I would describe it. A couple – a couple of surprises in there I think.

‘I certainly don’t think they [PGA Tour] should drop the hammer. Look, they are well within their rights to enforce the rules and regulations that have been set.

‘But there’s going to be – you know, it’s going to end up being an argument about what those rules and regulations are.

‘Look, I have some very close friends that are playing in this event in London and I certainly wouldn’t want to stand in their way to, for them to do what they feel is right for themselves.

Dustin Johnson, a former world No 1, is the jewel in the crown of the field for Centurion (right)

‘I certainly – it’s not something that I would do personally. But I certainly understand why some of the guys have went, and it’s something that we are all just going to keep an eye on and see what happens over these next few weeks.

‘I certainly don’t feel the field is anything to jump up and down about. Look at the field this week, look at it next week in Canada. They’re proper golf tournaments.’

Johnson, who has not been granted permission to leave and may now face a ban from the tour, cited his family’s best interests in allying with the rebel group.

Both the PGA Tour and DP World Tour have recently declined all requests from members who had asked for releases to compete at Centurion for the first event, where a whopping £19.8m is up for grabs, including £3.1m for the winner.

The PGA Tour event running at the same time as the first Saudi competition is the Canadian Open, offering prize money of £6.9m and the winner is expected to cash in around £1.1m.

Johnson is arguably the biggest name to be joining the Saudi-backed golf league, fronted by CEO Greg Norman (left), who hailed the arrival of free agency in the sport

Johnson previously insisted he was ‘fully committed’ to the PGA Tour in February, so his change of heart will come as a surprise and disappointment to many fans.

The 37-year-old’s manager David Winkle said: ‘Dustin has been contemplating the opportunity off-and-on for the past couple of years. Ultimately, he decided it was in his and his family’s best interest to pursue it.

‘Dustin has never had any issue with the PGA Tour and is grateful for all it has given him, but in the end, felt this was too compelling to pass up.’

He is joined by ex-major champion Sergio Garcia and they were announced among competitors for the opening LIV Golf Invitational Series event that did not include Phil Mickelson.

While six-time major champion Mickelson was not currently on the field list, he could still tee it up June 9-11 at the Centurion Club outside London as six spots in the 48-player event remain open.

Among the other notables included are former world number ones Lee Westwood and Martin Kaymer, as well as European Ryder Cup veteran Ian Poulter.