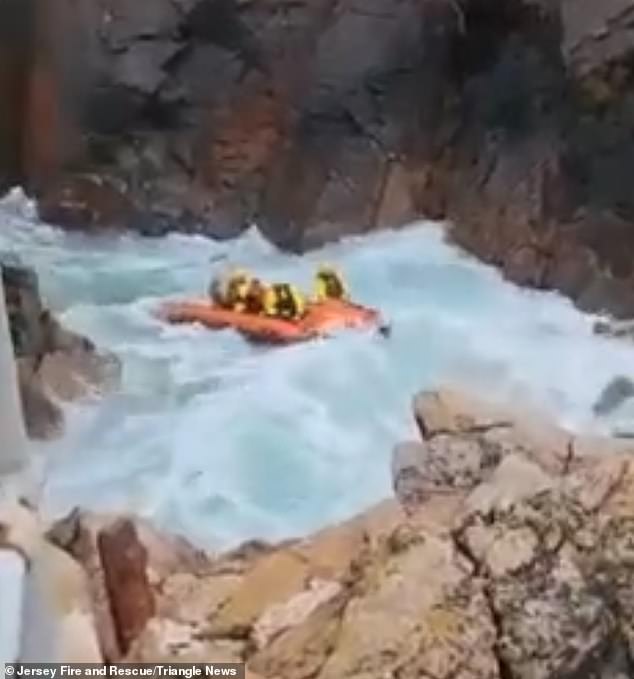 A lucky couple were saved by hero sea rescuers after they got swept into a cave by huge waves.

The woman had slipped on some rocks and fell into the water.

She broke her wrist in the plunge and her husband jumped into the sea to save her.

But they both then got swept into the cave by six-and-a-half foot high waves off the coast of Plemont, Jersey.

They were saved by crews from the Jersey Fire and Rescue, Jersey RNLI and the Jersey Coastguard.

A Jersey Fire and Rescue spokesperson said: ‘A lady had slipped from rocks into the sea and received a broken wrist.

‘Her husband had then jumped in to save her and both were washed up into the cave.

‘The Inshore rescue boat carried out a tricky veering down manoeuvre which involves using the anchor and line and powering astern into the narrow cave entrance.’

Once in a holding position in the cave, one of the crew jumped into the sea with a pair of lifejackets and swam over to the couple

The spokesperson added: ‘Once holding in position deep in the cave one of the crew swam in with life jackets and rescued the two causalities into the rescue boat.

‘The crew then proceeded out to safety and after retrieving the rescue boat at Greve De Lecq, handed the couple who were suffering with exposure and shock over to waiting paramedics who treated them for their injuries.’

Local Mary Lloyd Jones said: ‘Oh my goodness what a great team you are.’