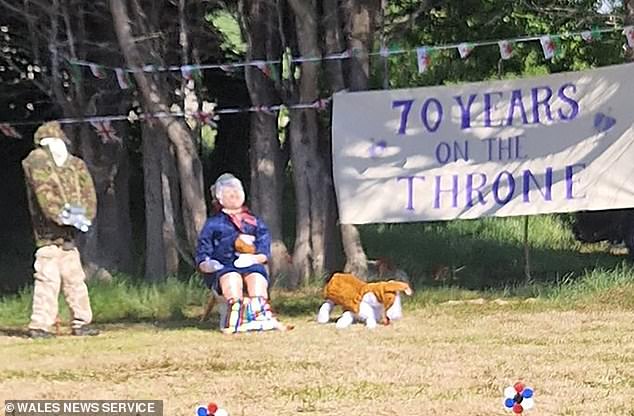 One would NOT be amused! Village display showing scarecrow of the Queen sat on TOILET next to ’70 years on the throne’ banner is set to be torn down after being branded ‘distasteful’

As Britain prepares to celebrate the Queen’s Platinum Jubilee – a landmark never reached before – communities across the UK are celebrating in their own unique ways, some more creative than others.

But one jokester in west Wales appears to be trying to scoop the comedy prize.

Along the A487 in Ceredigion, approaching Aberystwyth, drivers can encounter a scarecrow of Queen Elizabeth II sitting on a loo, Wales Online reports.

Behind the mock doll, a white bedsheet with the words ’70 Years on the Throne’ hangs between two trees, surrounded on both sides by small Welsh and Union Jack flags.

The scene is finished with a stuffed toy of a Corgi at the scarecrow’s feet, in homage to the Queen’s favourite pet, along with a military figure standing guard.

Pictures of the bizarre tribute attracted mirth on social media but Ceredigion Council has branded the display ‘distasteful’ and vowed to have it removed.

On Facebook, users reacted to the prank with a mixture of humour and disdain.

A woman said: ‘Ceredigion, for all your beauty and loveliness, you don’t half nauseate me sometimes’.

One man said: ‘It should be removed. It’s totally classless and doesn’t belong there.’

Another said: ‘Brilliant. It’s nice to see Ceredigion isn’t caving into this nonsense like Cardiff is.’

A social media poster said that he ‘thought it was Del and Rodney’, while yet another added: ‘Fantastic – well done Ceredigion.’

A spokeswoman for the Ceredigion Council said: ‘An unauthorised distasteful tribute display has been arranged on council land in Llanon ahead of the Platinum Jubilee Bank Holiday. The display shall be removed.’