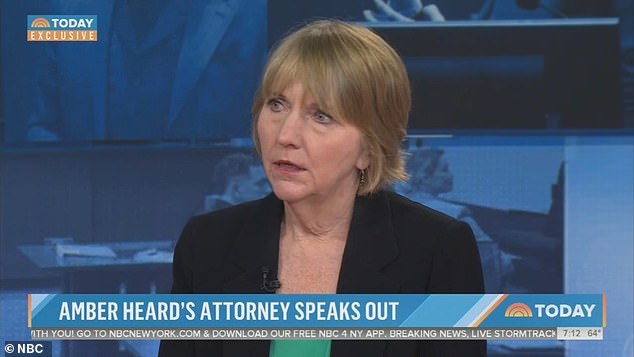 Amber Heard’s lead attorney has spoken out following her stunning civil suit loss and says the actress is unable to pay the $8.35 million in damages she owes Johnny Depp.

Lawyer Elaine Charlson Bredhoft, who represented Heard at trial, appeared on the Today Show on Thursday and said that Heard has ‘excellent grounds’ to appeal the verdict and plans to do so.

Asked if the Aquaman actress would be able to pay the damages she owes Depp after a jury vindicated his claims that she lied by accusing him of abuse during their marriage, Bredhoft replied: ‘No, absolutely not.’

In a blockbuster verdict, a jury in Virginia on Wednesday awarded Depp more than $10 million in damages. In a split decision, Heard also won a $2 million verdict against Depp, leaving her owing him a little more than $8 million.

Lawyer Elaine Charlson Bredhoft, who represented Heard at trial, appeared on the Today Show on Thursday and said that Heard has ‘excellent grounds’ to appeal

Amber Heard’s lead attorney has spoken out following her stunning civil suit loss and says the actress is unable to pay the $8.35 million in damages she owes Johnny Depp

‘It’s a horrible message. It’s a setback, a significant setback because that’s exactly what it means,’ Bredhoft said of the verdict.

‘Unless you pull out your phone and you video your spouse or your significant other beating you, effectively, you won’t be believed.’

The attorney insisted the jury in the case had been influenced by public opinion including on social media, despite strict orders from the judge not to read anything about the case outside of court.

‘There’s no way they couldn’t have been influenced. It was horrible. It was really, really lop sided,’ Bredhoft said of public sentiment against Heard in the case. ‘It’s like the Roman coliseum, how they viewed this whole case.’

Bredhoft said that Depp’s legal team had tried to ‘demonize amber and suppress the evidence.’

‘We had an enormous amount of evidence suppressed in this case that was in the UK case,’ she said, referring to Depp’s defamation suit against the Sun, which he lost. ‘In the UK case when it came in, Amber won, Mr. Depp lost.’

‘It’s a horrible message. It’s a setback, a significant setback because that’s exactly what it means,’ Bredhoft said of the verdict

At trial, Bredhoft faced off against Johnny Depp’s attorneys Benjamin Chew and Camille Vasquez, seen above before the verdict was delivered on Wednesday

Asked whether the verdict meant that the jury simply didn’t believe Heard, Bredhoft doubled down, responding: ‘That’s because she was demonized here.’

‘A number of things were allowed in this court that should not have been allowed and it caused the jury to be confused,’ she said.

Bredhoft said that Heard was feeling the ‘burden’ of Wednesday’s verdict.

‘One of the first things she said is, I am so sorry to all those women out there. This is a setback. For all women in and outside the courtroom. And she feels — she feels the burden of that,’ the attorney said.

The verdicts bring an end to a televised trial that Depp had hoped would help restore his reputation, though it turned into a spectacle that offered a window into a vicious and dysfunctional marriage.

Heard, who was stoic in the courtroom as the verdict was read, said she was heartbroken.

‘I’m even more disappointed with what this verdict means for other women. It´s a setback. It sets back the clock to a time when a woman who spoke up and spoke out could be publicly humiliated. It sets back the idea that violence against women is to be taken seriously,’ she said in a statement posted on her Twitter account.

Actress Amber Heard departs the Fairfax County Courthouse on Wednesday in Fairfax, Virginia after jury delivered a verdict in favor of her her ex-husband Depp

Depp, who was not in court Wednesday, said ‘the jury gave me my life back. I am truly humbled.’

‘I hope that my quest to have the truth be told will have helped others, men or women, who have found themselves in my situation, and that those supporting them never give up,’ he said in a statement posted to Instagram.

Depp sued Heard for libel in Fairfax County Circuit Court over a December 2018 op-ed she wrote in The Washington Post describing herself as ‘a public figure representing domestic abuse.’ His lawyers said he was defamed by the article even though it never mentioned his name.

The jury found in Depp’s favor on all three of his claims relating to specific statements in the 2018 piece.