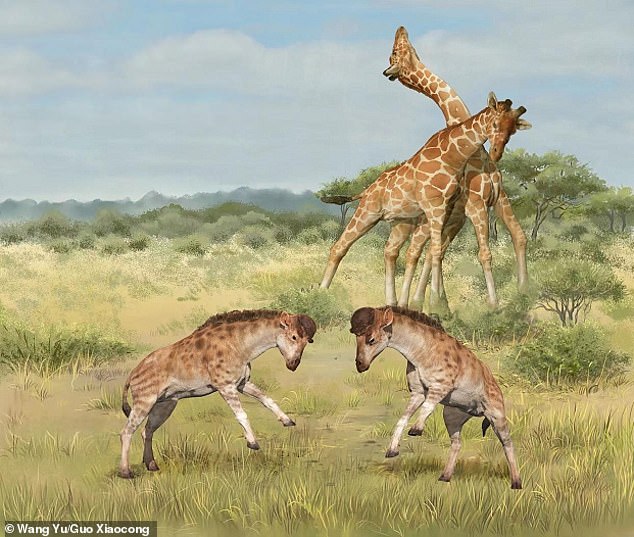 It’s commonly thought the giraffe evolved to grow its six-foot-long neck so it could reach leaves on the highest branches.

But a new study by Chinese experts claims the mammal’s distinctive neck evolved over millions of years because it was an effective weapon.

Researchers came to this conclusion following an analysis of fossils from a ‘strange’ early giraffoid species called Discokeryx xiezhi, which roamed the Xinjiang region of northwest China 17 million years ago.

Results suggest giraffes evolved long necks for hitting other males in the fight for a female, because the longer a neck allowed them to generate more power and speed.

Discokeryx xiezhi is an extinct species in the superfamily Giraffoidea.

It lived in the Xinjiang region of China up to 17 million years ago.

Researchers describe it as ‘strange’, because it had a more stumpy neck than today’s giraffes, and also a single dome-shaped ossicone on its head.

It had highly complex head-neck joints that were suited for whacking an opponent in a fight for mates.

Unlike modern giraffes, D. xiezhi had only one ossicone – the skin-covered bone structure at the top of the head – but it was shaped more like a dome or a disc.

D. xiezhi is so-called because its single ossicone resembles that of the xiezhi, a one-horned creature from ancient Chinese mythology.

The new study was led by researchers from the Institute of Vertebrate Paleontology and Paleoanthropology (IVPP) of the Chinese Academy of Sciences in Beijing.

‘Both living giraffes and Discokeryx xiezhi belong to the Giraffoidea, a superfamily,’ said study author Wang Shiqi at IVPP.

‘Although their skull and neck morphologies differ greatly, both are associated with male courtship struggles and both have evolved in an extreme direction.’

Today, the neck of a giraffe can be six feet long – taller than the average man – and can weigh up to 600 pounds.

Millions of years ago, the giraffe had a more stumpy neck, but competition for food drove the steady increase in neck length over many generations.

Longer necks allowed giraffes to browse for edible treetop leaves in the African Savannah woodlands that would otherwise be out of reach, according to Charles Darwin’s theory of natural selection.

The theory suggested giraffes with the longest necks were able access the required food to survive and pass on their genetic code to subsequent generations.

However, as observation of giraffe behaviour increased, scientists began to realise that the neck serves as a weapon in male courtship competition.

This is evident in clips that circulate online today, showing two males brutally whacking each other.

D. xiezhi is so-called because its single ossicone resembles that of the xiezhi, a one-horned creature from ancient Chinese mythology (depicted here as a sculpture in the Forbidden City in Beijing, China)

In an honorable example of fair play, giraffes pick similar-sized opponents to ensure a ‘square go’, a study reveals.

From observations in South Africa, researchers at the University of Manchester found males practiced head butts with males of similar stature.

Giraffe males fight for ‘access to a large number of females’ by launching their ossicones – the two skin-covered bone structures at the top of their heads – at their opponents, using their long necks for leverage.

Longer necks tend to generate more speed and power, so the longer the neck, the greater the damage to the opponent.

In fact, neck size of male giraffes is directly related to social hierarchy, and courtship competition is the driving force behind the evolution of long necks.

The fossils in this study were found in early Miocene ‘strata’ (a layer of rock or sediment) from about 17 million years ago on the northern margin of the Junggar Basin, Xinjiang.

A full skull and four cervical vertebrae belonging to Discokeryx xiezhi were part of the find.

Analysis indicates the ancient species had helmet-like headgear, more like a dome than a sharp point, and particularly complex head and neck joints.

Complicated articulations between the skull and cervical vertebrae of the species was particularly adapted to high-speed head-to-head impact, researchers found.

This structure was far more effective than that of living animals, such as the musk ox, that are well adapted to head impact.

In fact, D. xiezhi may have been the vertebrate best adapted to head impact ever, researchers think.

Results suggest the ability to whack an opponent with their necks, and the associated survival benefits, has been a key part of giraffe morphology for millions of years.

Pictured, two giraffes go at each other in a head-to-head position. Longer necks tend to generate more speed and power, so the longer the neck, the greater the damage to the opponent

Depicted is the community of wildlife in the Junggar Basin, Xinjiang, China, around 17 million years ago. Discokeryx xiezhi are in the middle

The research team also compared the horn morphology of several groups of ruminants, including giraffoids, cattle, sheep, deer and pronghorns.

They found that horn diversity in giraffes is much greater than in other groups, with a tendency toward extreme differences in morphology.

This indicates that courtship struggles are generally more intense and diverse in giraffes than in other ruminants.

Results also suggest D. xiezhi was living in dry open grasslands and may have migrated seasonally.

For animals of the time, the grassland environment was more barren and less comfortable than the forest environment.

In fact, the species’ violent fighting may have been related to survival-related stress caused by the environment.

The new study has been published in the journal Science.

Efforts to map the genome of giraffes has confirmed that there are four distinct species, and they are as different to one another as brown bears are to polar bears

Efforts to map the genome of giraffes has confirmed that there are four distinct species, and they are as different to one another as brown bears and polar bears.

Visually, they are hardly distinguishable, according to scientists at the LOEWE Centre for Translational Biodiversity Genomics in Frankfurt, Germany, who carried out the genetic analyses.

According to their comprehensive genome analyses, the four giraffe lineages have been evolving separately for thousands of years.

Read more: FOUR distinct species of giraffe, not one, identified by scientists