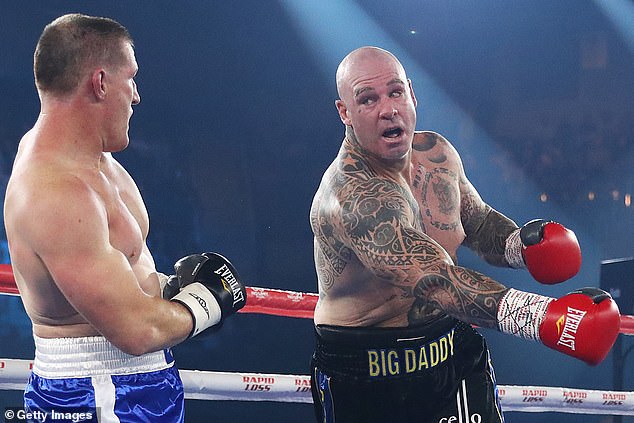 Lucas Browne refuses to chalk his shock defeat to Paul Gallen up as a loss and has accused the NRL great of resorting to illegal tactics.

The former Cronulla captain delivered a massive upset in April last year, stopping Browne in the first round of their bout in Wollongong to hand ‘Big Daddy’ only the third defeat of his professional career.

Browne, however, refuses to acknowledge the loss and insist Gallen delivered a flurry of cheap shots during the fight.

‘I don’t count the Gallen loss so much because he hit me behind the head five times,’ Browne told Fox Sports.

‘Then he popped my eardrum. I basically fought cross-eyed, so I didn’t know what was going on.

‘It’s not that I got knocked out, it’s that I had no balance. I can’t count that as a loss so to speak.’

Browne will be back in the ring against Kiwi star Junior Fa at Marvel Stadium on Sunday, on the undercard of the world title fight between George Kambosos and Devin Haney.

‘You don’t want to be remembered for your last bulls*** fights,’ he said.

‘You don’t want to be remembered for your c****y fights where people say you should have stopped three fights ago.