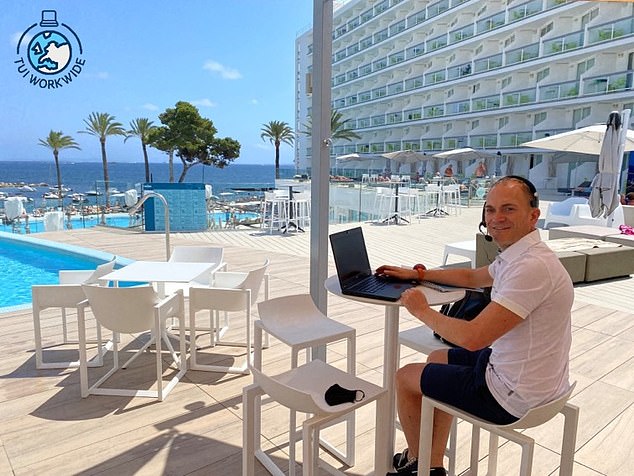 TUI bosses behind the chaos at UK airports were on ‘workatations’ doing their jobs from beside swimming pools in the med to ‘improve their work-life balance’ as problems began to mount.

Holidaymakers faced hours of delays and snaking queues on Wednesday as TUI cancelled more flights amid a staffing crisis at Britain’s travel hubs.

Such was the extent of the issues, a TUI pilot was forced to call the police to help hundreds of passengers disembark an ‘abandoned’ plane after they were left sat on the runway for three hours due to staff shortages.

But as holidaymakers face mayhem, the airline admitted today that it allowed members of its head office workforce to enjoy its ‘Workwide’ scheme – allowing staff to work outside the UK for up to 30 days a year.

Andrew Willis, head of talent acquisition and workforce management, was among the senior employees to take advantage, The Telegraph reports.

He posted online about working poolside at an all-inclusive TUI hotel in Ibiza.

Mr Willis said: ‘When I finished my work at 5pm, the sun was still there until 8.30pm, so I had plenty of time to swim and relax. In the evenings I could then switch off wonderfully.’

Andrew Willis, head of talent acquisition and workforce management, was among the senior employees to take advantage of the scheme

A business procurement manager also told of how he worked from Norway while watching the norther lights.

And a senior product development manager described using the scheme to work from Gran Canaria.

He said: ‘I had made sure beforehand that the rooms had a good Wi-Fi connection and so I could work from my balcony or from the pool bar.’

Staff have spent 4,500 days working abroad as part of the scheme, which was launched in August last year.

On Wednesday TUI took the decision to cut 43 flights a week – 186 in total through June carrying 37,000 passengers from Manchester – just hours after an extraordinary video emerged revealing two police officers were drafted in to tell their irate customers their holiday to Kos was now cancelled as they queued to board the plane.

The airline, which decided to cut 8,000 jobs during the pandemic and furloughed 11,000 of its staff, apologised to passengers and attributed delays to ‘ongoing challenges in our operation’.

British Airways, which has also cancelled more than 100 flights from Heathrow Airport, is another airline to have celebrated staff working from home.

Last year, it said it would allow employees to enjoy a hybrid of office and home working.

The airline, which has axed more than 10,000 jobs in recent years, heralded its approach to ‘offering more agile and flexible ways of working’.

Shocking scenes from around the country in recent weeks have shown holidaymakers stuck in huge queues with some forced to sleep on the floor of airports amid long delays.

Pictured: Passengers queue at the very busy Skylink between Terminal 2 and the railway station at Manchester Airport as people head on Jubilee weekend getaways

It comes as TUI is still selling holidays from Manchester leaving this weekend despite axing six flights per day from the airport branded ‘hell on earth’ because of long queues and shops running out of food and water.

Despite carnage at Manchester, 180 of Tui’s seven-day breaks to destinations including Majorca, Gran Canaria, Morocco and Mexico are still being sold for as much as £1,500 per person, leaving on Friday.

A spokesperson for TUI said: ‘We’re proud of the flexible ways of working we offer our colleagues who work in non-operational, office based roles.

‘We’ve always had a culture of trust with our colleagues and have offered this style of work for a number of years, and long before the work from home trend after the pandemic.

A statement added: ‘The TUI Workwide scheme is not open to staff who work in fixed locations, such as pilots, cabin crew, retail and those working in operational aviation roles, like in our operations control centre where this is manned 24/7 from an office location.

‘We believe this balance is important for understanding the nature of our global travel business alongside having a fulfilling career and improving overall personal well-being.’