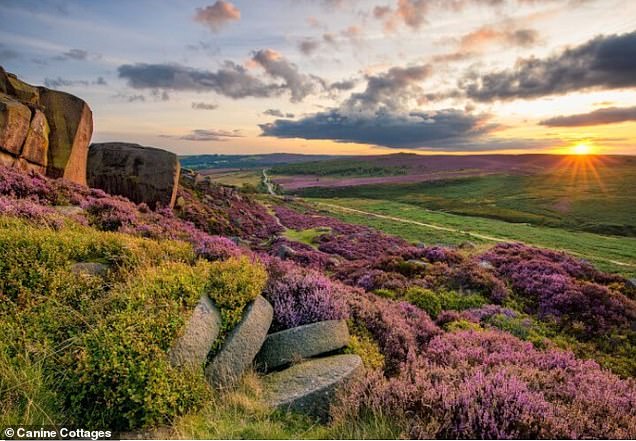 Ever wondered what it is your dog sees when they gaze up at you, or at the treat in your hand?

Fascinating photos developed by a vet reveal how our pooches see the world compared to humans.

Colourblind dogs are only able to visualise yellow and blue, as is demonstrated in a series of photos of popular tourist hotspots including the Peak District National Park, Brighton Pier and Durdle Door.

‘Dogs have dichromatic vision, which means that they only see in two colours; blue and yellow,’ said Rhian Rochford, a vet from online company PocketVet.

‘Whereas humans see in three colours; blue, yellow and red. Instead of seeing red, a dog will see dark brown.

‘Green will be seen as a beige colour and purple a blue tone.’

Dogs have dichromatic vision, meaning they only see in blue and yellow. The right image is how your dog would see the Peak District National Park, and the left is a human’s view

Brighton Pier would appear to bulge outwards to your dog and could be up to eight times blurrier than a human’s vision, as seen in the right hand picture

A dog cannot visualise the bright colours of Durdle Door as shown in the right-hand image, because they only have two types of colour-detecting photoreceptor cells in their eyes

Dogs still have a great quality of life despite their eyesight because they rely heavily on their other senses, like their smell which is between 10,000 to 100,000 times more acute than ours

At the back of the human eye are photoreceptors, which are what respond to the light shining in, and those used to detect colour are called ‘cones’.

The reason your pet’s vision is different is because they only have two types of cones, whereas humans have three.

Additionally, the photoreceptors used for motion and night vision are called ‘rods’.

Dogs’ retinas are rod-heavy, which is why they can see better in the dark and can detect motion a lot better than humans.

As demonstrated in the image from The Cotswolds on the right, dogs have four to eight times more blurred vision than humans, and also differentiate brightness half as well as humans

Even without the range of colours, there’s plenty for dogs to appreciate in the village of Portmeirion, North Wales, as can be seen from their POV in the image on the right

Dogs can only see yellow and blue, rather than the full colour spectrum that humans can. They will see dark brown instead of red, beige instead of green and blue instead of purple.

WHY DO DOGS SEE DIFFERENTLY TO HUMANS?

At the back of the human eye are photoreceptors – cells that respond to the light shining in – and those used to detect colour are called ‘cones’.

Dogs see in different colours to us because they only have two types of cones, whereas humans have three.

The photoreceptors used for motion and night vision are called ‘rods’, and dogs’ retinas are rod-heavy which is why they can see better in the dark and can detect motion a lot better than humans.

Dogs’ eyes are also positioned at a 20-degree angle, which increases their peripheral vision.

However, this also means that they can’t see things as 3D as humans, thus reducing their depth perception.

According to Ms Rochford, our canine companions are also born with up to eight times more blurred vision than humans, and reduced ability to perceive brightness.

She added: ‘Dogs have four to eight times more blurred vision than humans, they also differentiate brightness half as well as humans.

‘Dogs’ eyes are positioned at a 20-degree angle, which increases their peripheral vision.

‘However, this also means that they have less binocular vision – not seeing things as 3D – than humans, thus reducing their depth perception, or ability to determine the distance between objects.’

But don’t feel like you need to run out to Specsavers for some pup-sized glasses, as our pets still have a great quality of life despite their eyesight.

This is because they rely heavily on their other senses, like their sense of smell which is between 10,000 to 100,000 times more acute than ours, so are still able to cope well if their vision deteriorates.

According to a study from customer research firm TLF, 84 per cent of British dog owners are planning on taking a future staycation with their pet to show them the sights and smells of the UK.

Shannon Keary, from dog-friendly holiday lettings company Canine Cottages, which commissioned the photos, said: ‘With many Brits taking their pooches on staycation this year, we thought it would be interesting to see how dogs see the sights compared to how we do, and really understand what is going on in our dogs’ heads!

‘Although the images are drastically different, it’s exciting for dog owners to see what their pets are experiencing – and encouraging to also know that even without perfect vision, our dogs are still healthy and happy.’

Glenfinnan Viaduct is famously the railway line for the Hogwarts Express in the Harry Potter franchise, and Rhian Rochford has magically shown us how our dogs would see the train (right)

Dartmoor National Park would not be as colourful for your pooch, as shown in the image on the right, but they would still enjoy sniffing with a nose up to 100,000 times more acute than ours

Researchers from Eotvos Lorand University in Hungary found that dogs have an attachment to their owner’s voice, which generates reward-related brain responses in the pup.

Amazingly, this brain activity is similar to that of a newborn baby listening to their mother, indicating dog-owner and infant-mother relationships are more similar than previously thought.

To find out, the researchers invited 28 dogs and their owners to play a classic game of hide-and-seek in the lab.

The owner hid behind one of two hiding places, while a strange hid behind the other.

From their hiding places, both the owner and stranger then read out recipes in a neutral tone, while the dog was tasked with choosing one from a distance.

The game had several rounds, with 14 different strangers’ voices – including some more similar to the owner’s voice, and some more different.

To make sure smells didn’t help the dogs, in the last two rounds, the researchers played the owner’s voice from where the stranger hid, and vice-versa.

The results revealed that dogs found their owner in 82 per cent of cases – including when the voices were swapped.

According to the team, this suggests dogs did not use their nose in the task, and instead could recognise the voice alone.