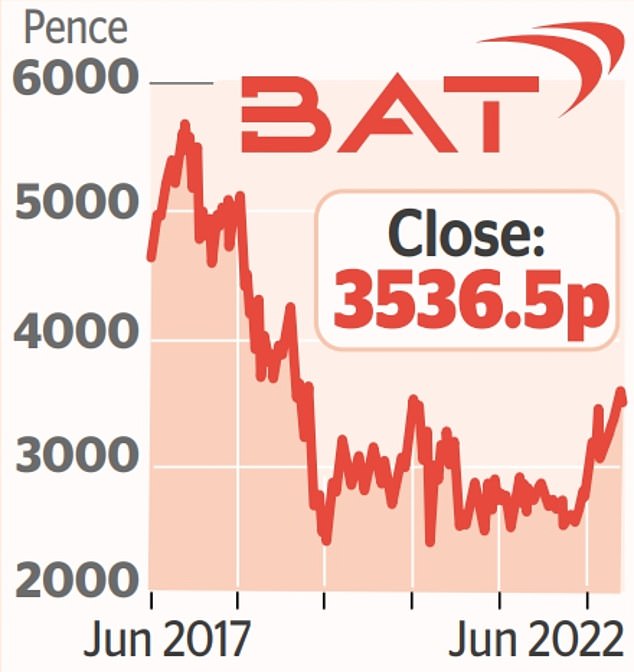 What next for BAT shares? Investors eye update on Pall Mall maker’s Russian exit and sales of vaping products

Shareholders will be checking for any update on British American Tobacco’s Russian exit as it reports on its progress so far this year.

The business is set to update shareholders on Tuesday, months after the Kremlin launched its war on Ukraine.

Having lingered for a while after the conflict started, BAT announced in March that it would withdraw from Russia.

BAT makes Pall Mall cigarettes and had a market share of around 25 per cent in Russia.

It is looking for someone to sell its Russian business to, so any update will be of interest to shareholders.

Investors will also be looking for any impacts that the company sees from the cost-of-living crisis. It is lucky in a way because of its defensive nature.

It is one of many firms in London which performs well even if the economy is in a rut. Just like medicines and food, people keep on buying cigarettes even during a downturn.

But while sales might not face much of a hit, the company will still be wary about what it is paying to make its products.

Raw material and labour costs have spiked in recent months. It could pass these extra costs on to consumers.

When they pick up the trading update on Tuesday many investors will also search for information on the New Categories business.

They include a line of vapes, Vuse, which by one measure is the largest in the world, under-lip nicotine pouches called Velo, and heated tobacco products Glo.

Last year these products generated more than £2billion in revenue, and this is meant to have more than doubled in a couple of years, according to BAT’s targets.