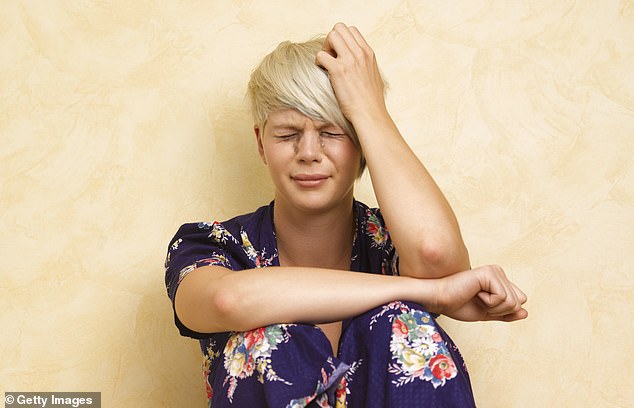 So THAT’S why you get caught in negative thought spirals: Psychologist explains your brain is trying to ‘protect’ you by fixating on potential threats

A psychologist has revealed why people are often more drawn to negative thoughts than positive ones, to the extent it can affect their mental health.

Dr Gurpreet Kaur, a chartered clinical psychologist based in Surrey, shared her thoughts in a recent TikTok video on her channel, where she posts educational content about mental health topics.

In the clip, she addressed a question asked by one of her followers, which touched on the topic of why some people ruminate on negative thoughts, which in turn affects their mood.

The question said: ‘Why does our mind want to destroy us?’

A psychologist has revealed why people are often more drawn to negative thoughts than positive ones, to the extent it can affect their mental health. Stock image

Dr Kaur explained that it is down to a ‘negativity bias’, where people are more likely to fixate on negative thoughts than positive ones.

However, this behaviour can be changed and improved.

‘If you get something positive and negative, and they are on an equal par, we are going to be naturally attuned towards looking towards the negative,’ she explained.

‘Maybe it’s evolutionary. Maybe it’s because historically, we’ve had to work really hard to keep ourselves alive and safe as a species.

‘So we’re more tuned towards the threat of something, rather than the positive of something.’

It means the brain might think it is being ‘helpful’ by fixating on negative thoughts, when in reality it is the opposite.

‘Maybe the mind isn’t trying to destroy us, maybe it’s actually trying to keep us safe in a way that makes sense to it,’ she said.

‘And that’s why we need to learn to observe it. Because sometimes the mind will be doing something that is unhelpful, but it needs updating.

‘It needs to be given the message that it’s actually unhelpful, and that it doesn’t need to keep doing this thing anymore.’

When it comes to how to change these negative thought patterns, she suggested that there is a simple thing people can try.

‘Just try to pay more attention to the positives,’ she said, ‘because the brain needs to be taught that it’s safe to think about the positives, and that you don’t have to focus on the negative all the time.’

Sharing their own thoughts on the mind’s tendency to dwell on the negative, one of the video’s viewers commented: ‘brain gives us worst case scenarios so we are prepared. if things work how we want then fantastic.’

Another agreed, writing: ‘It takes a lot to focus more on positives.’

A third wrote: ‘Thank you this makes so much sense! We always focus on the negative and it really doesn’t have to be this way.’

And another added: ‘this is so interesting because I often think it I STOP negative rumination I’m leaving myself at risk of negative things occuring without warning.’

The video struck a chord with viewers, who took to the comments section to share their own thoughts on why the mind often focuses on negative thoughts