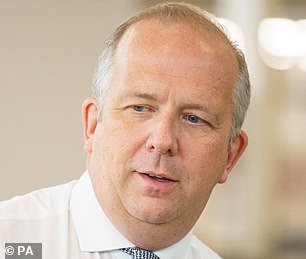 As shoppers struggle, the UK’s second-biggest grocer gave its chief executive £2.8million in bonuses and incentives, and an £875,000 salary for the year to March 5. With benefits and pension contributions it took his package to £3.8million, up from £1.3million.

Finance chief Kevin O’Byrne’s pay jumped to £3.2million, from £2.3million. Despite waiving his £1million bonus last year, Roberts, 51, did not do so this year, saying his focus was ‘what we are doing for customers and for our colleagues’.

He was paid 183 times more than the average Sainsbury’s employee.

Andrew Speke from the High Pay Centre thinktank said: ‘claim to be standing by his customers, while accepting such a big pay rise seems hypocritical and out of touch. It should be prioritising keeping food prices low and wages high for its shop floor workers.’

Sainsbury’s said it was investing £500million to lower prices and £100million in raising staff pay. It said: ‘Management pay is strictly aligned with the progress we are making for customers, colleagues and shareholders.’