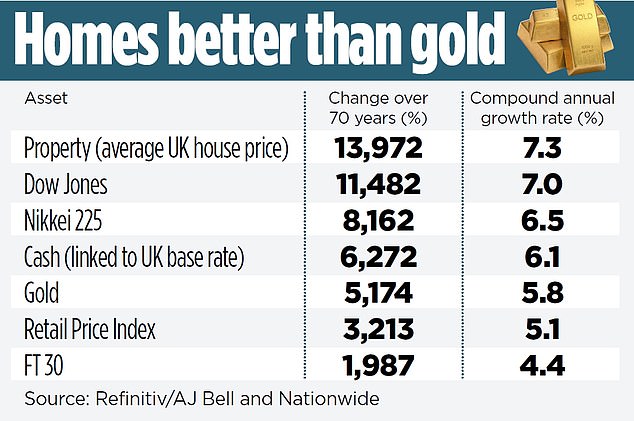 The best investment of 1952: What has risen the most over the Queen’s 70 year reign, property, gold, cash in the bank or shares?

Unlike the Queen, most of us live in semi-detached or terrace houses, not palaces. But property of all types has put in a majestic performance, outpacing other assets – including shares – over the 70 years of her reign.

The Mail on Sunday asked investment platform AJ Bell to find out how other asset classes had performed over the past seven decades, and how they fared against inflation, once again a hot topic.

The Dow Jones index of leading US shares was the best-performing equity market. That index, which tracks 30 leading US companies, notched up an impressive 7 per cent annualised gain in capital terms. Japan’s Nikkei index also fared well, up the equivalent of 6.5 per cent a year.

The FT-30, the oldest continuous share price index in the UK, returned an average of 4.4 per cent a year over the period. That gain would have been eaten away by inflation, which averaged 5.1 per cent a year as measured by the Retail Price Index.

However, these stock market performance figures exclude dividend payments, which, if reinvested, would have helped the FT-30 score significantly higher.

Surprisingly, risk-free cash tracking the Bank of England base rate for 70 years would have been a good bet, yielding a 6.1 per cent annualised return, outperforming gold at 5.8 per cent.

Fit for a queen: Property of all types has put in a majestic performance, outpacing other assets – including shares – over the 70 years of the Queen’s reign

‘Cash looks relatively good because of the double-digit interest rates of the 1970s and 1980s as the UK tried to bear down on inflation,’ said AJ Bell investment research director Russ Mould. ‘By contrast, anyone who put money into the UK equity market in 1966 only got it back in real terms in 1982.’

Mould added: ‘The strong advance in house prices shows ‘real’ assets can offer a hedge against inflation, as neither central banks nor governments can conjure land or buildings out of thin air, whereas they can print money.

But even the housing market has suffered the occasional wicked correction – the downturn that left many housebuyers with negative equity for most of the 1990s was one. And you can’t take the bricks to the supermarket or pay your bills with them, no matter how great your capital gain.’

The average house price is still 4.3 times higher in real terms than it was in 1952. Adjusting for inflation, the average 1952 house was worth £61,000. Then just 32 per cent of households owned their own home, compared with 65 per cent today.

When comparing the performance of various share price indices over such a long period, it is worth remembering that their make-up is constantly changing. When the Queen ascended the throne, industrials such as shipbuilder Swan Hunter and carmaker Morris Motors dominated.

No banks or oil companies were included. The FT-30 didn’t capture the biggest companies. Its constituents were selected by journalists at the Financial Times to represent companies that were significant to the UK economy at the time.

Other FT 30 members included long-forgotten names such as Lancashire Cotton – set up by the Bank of England to rescue the struggling spinning industry – and paint maker Pinchin Johnson.

Both were later bought by textile giant Courtaulds, another FT-30 constituent in 1952, and another name that has now vanished from industry.

In 2018, engineering group GKN was controversially acquired by buyout group Melrose, leaving Tate & Lyle as the only member of the 1952 blue-chip index that kept a continuous stock market listing under the same name.

The 163-year-old firm has also changed considerably. Its sugar business, including the Lyle’s Golden Syrup brand, was sold in 2010 and the group now focuses on reformulating processed foods to make them healthier.