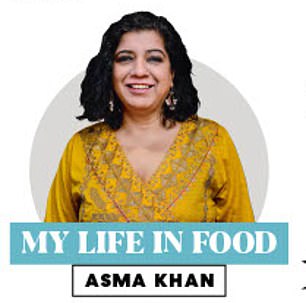 My earliest food memory is eating with my sister in my family home in Calcutta and being fed from one plate. It would have been parathas and very soft rice. I don’t ever remember eating alone.

My mother, Ammu, was very unusual as she was the only one in her family who cooked. It was because she was always trying to please people. Being one of five daughters – and not her parents’ favourite – she always felt like she had let them down. Cooking was her way of showing her worth.

It was very unusual for an Indian mother to treat three children equally. My sister was so beautiful compared to me – I was always, in the extended family, described as the ‘dark-skinned, ugly child’. And in India, the blessed child is always the boy. Especially an only boy. But my mother was remarkable, and understood how I felt, and was all about equality and gently shaking the patriarchy.

Back in the 70s, my parents would take our servants out to dinner with us. This doesn’t even happen today! People would stare and I thought it was because they were impressed by us children eating with knives and forks. It was only when I was writing Ammu that I fully understood why – they weren’t impressed, they were appalled.

We weren’t allowed to go to the street vendors, but I did anyway. Street food was cheap and still is, but it’s not trendy or fashionable. It’s the poor feeding the poor, the food of resilience. That street vendor has to sell his entire cart, which he’s carrying on his head, as he walks each day from slum to city centre. He has to be innovative and clever too so you come back and don’t go to his rival. And he needs to sell everything, so his family can eat. The food is fabulous, and they’re not celebrated enough.

India is divided by food. Street food is the only place where Indians eat next to each other, the great leveller – regardless of class and caste.

The food at home in India, and the food we eat out have always been different. No one is going to go out and spend money on food you could make at home for almost nothing. We would go out to eat tandoori chicken and naan because that was a real treat –something you couldn’t get at home as no one had a tandoor.

In India, we’ve got so disconnected from farmers and from the soil. There’s still a strong food culture, and at home people eat their own regional food, but that’s a very private thing. In restaurants, there is a lot of trying to ape the West. No one is opening Indian restaurants. It’s all young people, obsessed with trends. Restaurants open one day, close the next. It’s really, really depressing.

When I arrived in Cambridge, 30 years back, I felt uprooted and bereft. My husband Mushtaq was simply not interested in food. He grew up in war zones, so for him, food is about just surviving. For me, though, food was my culture, part of my DNA. I couldn’t change the person I married, I couldn’t change Cambridge and going back wasn’t an option because of the shame it would bring the family. But he is a good person, and we’ve been married for 30 years. So what if he’s not interested in food? I can live with that. It’s one less customer to worry about.

I thought I didn’t know how to cook, as I had never cooked. But I was immersed in the whole tradition from a very early age from being with my mother. And when I started to learn to cook in Cambridge, I could hear Ammu’s instructions. Aromas came back to me. I could hear the sounds. Because I was there, I learned it this immersive way. Which is the best way to learn.

We have an all-women kitchen at Darjeeling Express. I opened it in Carnaby Street in 2017 and it sprang from a supper club I ran at home. The greatest irony is that in every home you go to in India, Pakistan or Bangladesh, a woman is cooking or she’s in charge. But in every restaurant you go to, it’s a man. Boys were never in the kitchen growing up. They ate with the men first. Women ate last, and girls ate least. This is our culture.

None of the women at Darjeeling Express ate the food that they’re cooking now. All they did was watch Ammu when she was here, teaching them, then watch me cook and they learnt quickly. Cooking by instinct and intuition, by flavour and smell, when the mustard seeds pop and the curry leaves sizzle. You cook with all your senses.

I’ve worked with a lot of refugees in Palestinian and Syrian camps and the first thing they talk about is the food they ate. There is nothing as powerful as food. It gives a sense of belonging.

Asma cooking with her mother when she was younger

I am the only female-founded, all-female Indian kitchen in the world. And I could only do this in London. It’s the greatest city in the world. In India, no one would let us survive because the women come from different castes and religions. The lynch mob would have turned up. Seriously.

When it comes to traditional British food, I love shepherd’s pie with ketchup on the side. And trifle and scones with clotted cream.

The warmth and delight that greeted the news of my being the first British chef to be profiled on the Netflix series Chef’s Table was very humbling. A recognition of the diversity of food available in this country.

My final meal would be Ammu’s biriyani. It is about forgiveness and unspoken love. And I think that for my final meal, I would need to know that I was loved.