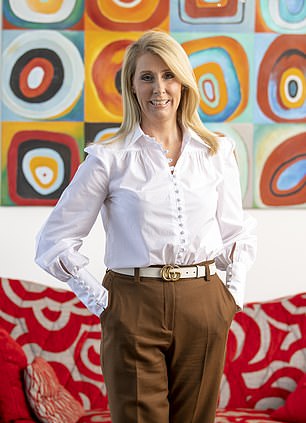 Nationwide’s new chief executive is expected to reassure members of Britain’s largest building society its branch network is safe in her hands.

Debbie Crosbie, who takes over this week as the first female chief executive in the mutual’s 175-year history, closed hundreds of bank branches in her job running TSB.

But The Mail on Sunday understands she plans to confirm a landmark pledge by Nationwide to maintain its 625 branches into next year at least – and may extend the commitment.

Nationwide bosses believe customers need branches more than ever – saying they use the premises not just for access to cash but also, increasingly, for face-to-face financial counselling and advice as they grapple with the unprecedented squeeze on household budgets.

A renewal of the vow by Crosbie is likely to soothe worries among Nationwide’s 16.3million members and its staff over the future of branches. The mutual made its ‘branch promise’ in 2019. The pledge has since been extended from May 2021 to January 2023.

The current commitment is to leave no town or city currently served by Nationwide without a branch. The society admits there are occasional circumstances making it impossible to keep a branch open. However, it has shut branches at a much lower rate than the Big Four banks.

Banks are expected to shut around another 500 branches this year.

TSB, which is owned by Spanish bank Sabadell, closed 244 branches during the pandemic when Crosbie was in charge. Another 70 will go this year, meaning more than 300 will have shut in three years. Like its rivals, TSB blames ‘declining branch use’ and the growing trend to bank online.

Crosbie also has other issues to face – not least customer complaints. Consumer group Fairer Finance says the number of cases about Nationwide upheld by the Financial Ombudsman has crept up to a ‘massive’ 49 per cent, well above the industry average.

‘Nationwide was always much better than that, so I’m not sure what’s going on there,’ says Fairer Finance’s managing director James Daley.

John Cronin, banking analyst at stockbroker Goodbody, thinks Crosbie will bring ‘deep experience’ of managing change to Nationwide. ‘She orchestrated a remarkable turnaround in financial performance at TSB,’ he said.

Earlier this year, The Mail on Sunday revealed that Nationwide had held talks to buy TSB but initial discussions stalled. ‘One wonders whether Crosbie will seek to reignite the conversation,’ Cronin added.