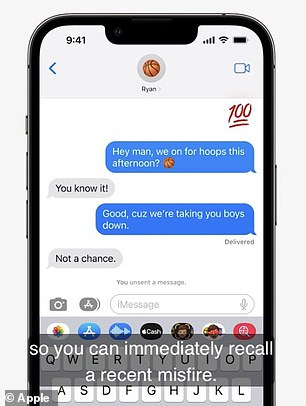 Regret that message? Apple will let iPhone users UNSEND or edit messages in the iOS 16 update

Many of us have at least one message we wish we had never sent.

But the days of worrying while you wait for the recipient to read the message could soon be a thing of the past.

Apple has announced that users will be able to unsend messages in its upcoming iOS 16 update.

‘The addition of “edit” and “undo send” underline this and will be welcome additions.”’

What is Apple unveiling at the event?

Apple traditionally uses WWDC to introduce new versions of the software that powers its most popular devices — the iPhone, Apple Watch, iPad and Mac computers.

But this year there have been suggestions that a range of new products and updates could also be announced:

It applies to Apple’s iMessage app, and will come in the iOS 16 update, which is likely to launch next year.

In a newsroom post, Apple explained: ‘Users can edit or recall recently sent messages, recover recently deleted messages, and mark conversations as unread so they can come back to them later.’

If you spot a typo in a message, you can simply edit it, and the recipient will see a label on the message saying ‘edited.’

‘Embarrassing typos can be a thing of the past!’ Mr Federighi said.

Meanwhile, if you send a message to the wrong person, or simply regret it, you can unsend it.

In that case, the recipient will simply see a message reading ‘[contact name] unsent a message.’

‘You can immediately recall a recent misfire,’ Mr Federighi added.

The news has been welcomed by many Apple fans over on Twitter.

One user wrote: ‘Apple adding unsend on ios 16 was a mistake. I’m about to make horrible life decisions.’

And one joked: ‘Toxicity levels is gonna be at a all time high now with this new apple unsend option.’

In a newsroom post, Apple explained: ‘Users can edit or recall recently sent messages, recover recently deleted messages, and mark conversations as unread so they can come back to them later’