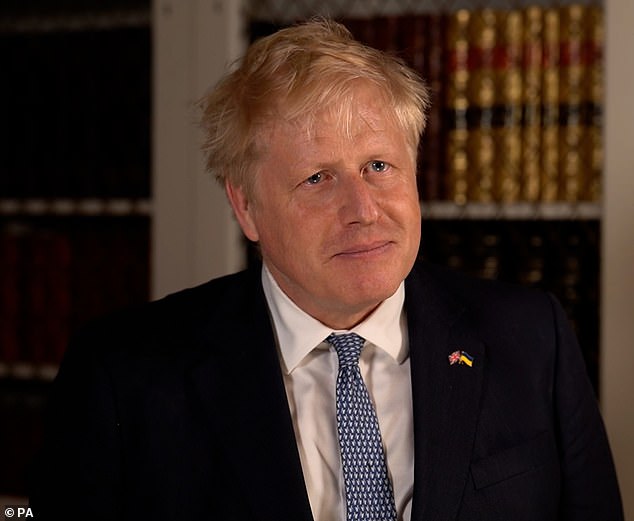 Serial rebels who continue to agitate against Boris Johnson could be kicked out of the party as he prepares to launch a fightback to shore up his damaged leadership.

The Prime Minister is expected to embark on a policy blitz in the coming days, including measures to extend the right to buy to housing association tenants.

And in his barnstorming speech to MPs two hours before yesterday’s vote, he hinted that he would lay out plans for tax cuts within weeks.

Meanwhile, allies of the Prime Minister last night said he is also considering measures to stamp his authority on Tory MPs after the latest round of bloodletting.

These include bringing forward a planned Cabinet reshuffle to put in place the team to take the Tories into the next election.

The Prime Minister has hinted that he will lay out plans for tax cuts within weeks and other measures such as extending the right to buy to housing association tenants. This policy blitz could also see a planned Cabinet reshuffle be brought forward

Serial rebels who refuse to accept the PM’s leadership may also face the withdrawal of the Tory whip, effectively ejecting them from the party and leaving them ineligible to stand for the Conservatives at the next election.

It comes after 41 per cent of Mr Johnson’s MPs declared they had no confidence in his leadership in yesterday’s confidence vote.

In a make-or-break meeting with MPs in the Commons ahead of the vote, Mr Johnson had insisted he could take them to victory at the next election as he promised: ‘The best is yet to come.’

He warned that Labour would win next time if the party descended into the ‘pointless fratricidal debate’.

And he said that if Conservatives got rid of him, they would lose the Brexit they had achieved, put the Union under threat – and even betray Ukraine’s hopes of seeing off Putin’s aggression.

Mr Johnson laid out a slew of new policies, including reforms to childcare, help to cut the cost of transport and energy, and moves to embrace ‘Brexit freedoms’.

But allies of the Prime Minister said he was also considering radical moves to shore up his position, including removing the whip from leading rebels and carrying out a Cabinet reshuffle.

One close ally of the PM told the Daily Mail: ‘The PM’s weakness is he’s too nice to people.

We need to start getting tough with some of these people and send a message that we’re not going to put up with it any more.’

The Prime Minister survived a no-confidence vote and it is believed that serial rebels who refuse to accept his leadership may also face the withdrawal of the Tory whip, leaving them ineligible to stand for the Conservatives at the next election

No names were mentioned, but senior figures in Downing Street have struggled to contain their anger at persistent rebels such as former ministers Tobias Ellwood and Mark Harper.

How does Boris’s result compare to previous Tory confidence votes?

Mr Harper, the pro-Brexit former Tory chief whip and anti-lockdown campaigner, was said to be one of the main MPs who spent the past few weeks whipping up older MPs to vote against Mr Johnson.

Mr Ellwood is still an ardent Remainer and last week floated the idea of rejoining the EU single market if Mr Johnson is ousted.

The PM is this week expected to concentrate on policies to boost the NHS and to make housing more affordable for young people.

Tomorrow the Government will publish a major review into the future of NHS management, written by former marine Sir Gordon Messenger. His report will look at ways of replicating good leadership across the NHS.

Yesterday afternoon Mr Johnson told MPs: ‘If I’m here later this week – and I very much hope that I will be – Michael Gove and I will be setting out plans to kindle that dream of home ownership into the hearts of millions who currently believe it is beyond their means.’

He added: ‘There is one chunk of household income that is the biggest of all and that is tax. The way out now is to drive supply side reform on Conservative principles and to cut taxes and to drive investment in the UK, taking advantage of Brexit freedoms.’

He said he had spoken to President Zelensky and that ‘it was absolutely clear that a strong UK position is needed more than ever because of course the pressures are growing on Ukraine to accept a bad peace deal’.

Former Brexit minister Lord Frost last night called on the PM to deliver tax cuts to turn around his fortunes.

He said: ‘If the PM is to save his premiership and his government he should now take a different course – bring taxes down straight away to tackle the cost of living crisis, take on public service reform, and establish an affordable and reliable energy policy for the long term.’