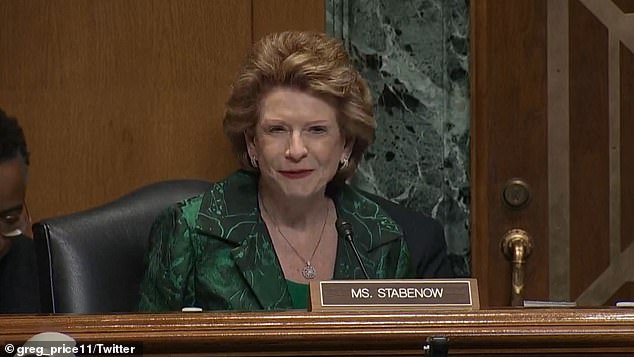 Democratic Senator Debbie Stabenow said that record-high gas prices ‘don’t matter’ to her because she has an electric vehicle as she urged Americans to by eco-friendly vehicles and decrease reliability on greedy oil companies.

Her comments came on the day the average price per gallon of gas in the U.S. reached a new high of $4.92. In Michigan the average sits higher at $5.17 per gallon, according to AAA’s tracker.

‘On the issue of gas prices – after waiting for a long time to have enough chips in this country to finally get my electric vehicle – I got it and drove it from Michigan to here this last weekend and went by every gas station and it didn’t matter how high it was,’ the Michigan senator said.

She added: ‘I’m looking forward to the opportunity for us to move to vehicles that aren’t going to be dependent on the whims of the oil companies and the international markets.’

The average cost of an electric vehicle, according to Kelley Blue Book, is $56,437, which is approximately $10,000 higher than the industry average including cars that are electric and gas.

Her remarks were met with fury. Republican Repo. Byron Donalds said: DEMs continue to laugh at the struggles of working-class Americans who are suffering due to Biden’s Price Hike. Just look at how happy Debbie Stabenow is when boasting about driving her EV.

‘I can assure you Michiganders aren’t laughing.’

As of Tuesday, the average price per gallon of gas in the U.S. reached a new high of $4.92 – and it’s even higher in Stabenow’s home state of Michigan at  $5.17 per gallon

Stabenow’s office did not immediately respond to DailyMail.com regarding the senator’s comments.

Some of President Joe Biden’s lowest marks are on his handling of gas prices, which the administration continues to dub the ‘Putin gas price hike’ in an attempt to peg the continually inflating numbers on the war in Eastern Europe.

Michigan is a battleground state that went marginally red in 2016 for Trump by just 0.3 percent and swung back to blue in 2020, going 50.6 percent for Biden and 47.8 for the former president’s reelection.

Stabenow’s comments downplaying concerns of Americans who are struggling to afford the $100 plus it cost to fill their cars’ gas tanks came during a hearing with Treasury Secretary Janet Yellen about soaring inflation.

The Democratic senator from Michigan is on the Senate Finance Committee, where Yellen was testifying on Tuesday about Biden’s Fiscal Year 2023 budget amid record-high inflation.

Stabenow is currently in the middle of her third term in the upper chamber of Congress. Before that she served as a member of the House of Representatives for Michigan’s 8th district from 1997 to until her election to the Senate in 2001.

When adjusted to reflect inflation of the value in 2020, Stabenow has been making over $212,000 per year since becoming a member of Congress in the late 1990s.