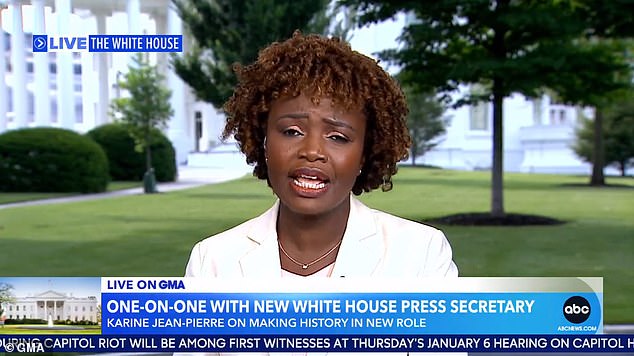 White House Press Secretary Karine Jean-Pierre on Tuesday morning blamed ‘global challenges’ including the invasion of Ukraine and pointed to the Trump administration for inflation and the state of the economy.

Biden is under pressure to fix the highest inflation in 40 years and is calling it his top priority, but polls show Americans overwhelmingly doubt his ability to turn things around.

An ABC News poll from over the weekend found just 28 percent of Americans approve of Biden’s handling of inflation and 80 percent say it is an extremely important factor in how they will vote.

Gasoline prices also set another new record high on Tuesday, averaging $4.92 per gallon for regular just as many families prepare to set off on their summer vacations.

But the White House is still championing their ‘strong’ economic recovery after Biden said on Friday that Americans are more ‘financially comfortable’ during his presidency.

In comments to ABC’s ‘Good Morning America’ Tuesday, Jean-Pierre called actions Biden has already taken, like tapping the Strategic Petroleum reserve, a ‘big, big deal,’ even as she said the president is giving the Federal Reserve ‘some space’ to use its own tools to deal with the issue.

‘Especially when it comes to food and gas prices, the president understands this. He grew up in a family when prices went up just a little bit, how much it impacted their lives, what we’re dealing with right now, is global challenges.

‘When the president walked into this office the economy was in a crisis and he put a plan forward, the American Rescue Plan that Democrats, only Democrats voted for.

‘And it’s put us in a place where we are in a stronger economic position to deal with inflation,’ she said.

‘The president is going to continue laying out his plans. He did an op-ed last week laying out the three, four things that he’s planning to do, giving the Federal Reserve some space, some independence because they have the most impactful tools,’ she said.

Average gas prices have jumped 30 cents in the past week, and $1.87 from a year ago, according to the AAA Gas Price Index

She also mentioned Biden allowing the summer sale of E15 gas, which pollutes more during the summer, to help with prices, saying it was ‘going to help families in the midwest.’

With Biden under pressure to better sell prior accomplishments to combat his low approval ratings, Jean-Pierre also pointed to the Trump administration and passage of the $1.9 trillion American Rescue Plan, which included coronavirus relief.

Biden’s new press secretary also hammered the issue at Monday’s press briefing, where she read from a binder when asked if the administration would be putting out new anti-inflation proposals.

‘So, everything is on the table, as you heard us — as you heard us say the last couple of weeks. But I do want to say: Look, you know, if you look at what happened when Putin started amassing troops on the border with Russia, the price of gas has increased by $1.51,’ she said, referencing the troop border on Russia’s border with Ukraine.

‘And all of this has happened since December of 2021 … This is a global challenge. This is something that everyone is feeling across the globe.’ She also pointed to rising food prices linked to the war in Ukraine.

On Tuesday, Jean-Pierre retweeted a post by an assistant press secretary featuring the clip, and listing the high cost of gas in other countries.

‘But we’re going to continue to do everything that we can,’ she said.

‘President Biden is delivering the holy war on American domestic energy that he promised on the campaign trail. Meanwhile, energy costs and gas prices for American families have absolutely skyrocketed,’ he said.

‘The President’s staff try to play this off as ‘Putin’s price hike,’ but the reality is that prices were already climbing steadily long before the escalation in Ukraine. Up more than a dollar per gallon before Putin’s escalation,’ he said.

A new ABC News/Ipsos poll shows that 83 percent of Americans say that the economy is either an extremely or very important issue in determining how they will vote in the 2022 midterms – and a vast majority disapprove of Biden’s handling of economic recovery, inflation and gas prices

Gas prices hit ANOTHER record: Fuel rockets to $4.92 per gallon – up nearly $2 from a year ago – as 13 states top $5 average just as summer travel starts

Gasoline prices set another new record high on Tuesday, averaging $4.92 per gallon for regular just as many families prepare to set off on their summer vacations.

Average gas prices have jumped 30 cents in the past week, and $1.87 from a year ago, according to the AAA Gas Price Index, and are now on pace to top $5 per gallon by the end of this week.

President Biden, in a new statement, talked up the strength of the recovery, even as some big names on Wall Street raise recession fears.

‘Today, we received additional news underscoring the strength of our economic recovery. U.S. goods exports hit a record in April, even after adjusting for inflation, which in turn narrowed the trade deficit. While monthly trade data can be volatile, this suggests American businesses and farmers are selling record numbers of their goods abroad, as we continue to make more in America,’ Biden said.

‘In addition, one of the nation’s largest retailers announced that it will take swift action to lower prices for certain goods, as American families’ spending returns to more normal patterns. This is an additional indicator that our economy is beginning to transition from an historic recovery to steady, stable economic growth,’ he added, in a likely reference to Target.

Like his press secretary, Biden touted his early economic actions.

‘The economic progress we have made didn’t happen by accident—it is a direct result of my economic plan to grow the economy from the bottom up and middle out and to unsnarl supply chains so retailers can rebuild inventories and American goods can more smoothly move through our ports. There’s more work to do to build on our historic recovery and bring down costs for families, without giving up on the significant gains we’ve made in the last year. I’ll work with anyone serious about helping transition our economy to steady, stable economic growth,’ he said.