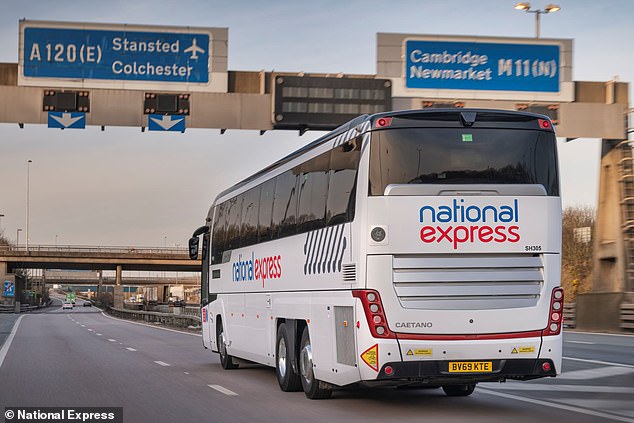 Investors in National Express suffered a fresh setback after the coach operator warned that profits are recovering far slower than expected.

The slump came after National Express said it expects ‘the recovery in profitability to lag our revenue recovery’ over the next five years. The company, which operates in Britain, the US, Spain and Morocco, said profit margins will be lower than hoped.

Slow lane: National Express said it expects ‘the recovery in profitability to lag our revenue recovery’ over the next five years

In its trading update, it has forecast full-year revenue for 2022 to be close to £2.7billion, a level last seen before the pandemic struck.

Smoking giant British American Tobacco climbed towards the top of the blue-chip leader board after Barclays analysts rated the stock ‘overweight’ and raised its target price from 4200p to 4400p.

The Pall Mall cigarette maker has seen its share soar 28 per cent in the past year and investors will be hoping for more good news at its trading update tomorrow.

Shares rose 1 per cent, or 33.5p, to 3566p. Mining stocks provided a boost following an upgrade by Jefferies amid rising demand from China.

But it was a day to forget for retailers whose shares slipped following British Retail Consortium figures showing consumers cut back on their spending in May.

Shares in Africa-focused oil and gas company Bowleven soared after it joined forces with a major European operator at its project off the coast of Cameroon.

The firm, listed on AIM in Lon-don, has been in partnership with New Age at the Etinde site.

But New Age has agreed to sell its share to Perenco.

Bowleven boss Eli Chahin said it is ‘very positive news’ given Perenco already produces around 100,000 barrels of oil a day in Cameroon.

The top index was dragged down by one of Britain’s biggest investors in Silicon Valley as shares in Scottish Mortgage Investment Trust fell 2.7 per cent, or 21.6p, to 776.6p.

The impact of a windfall tax continued to filter through the FTSE 100, with shares in the North Sea-focused Harbour Energy down 1 per cent, or 3.7p, to 380.6p as Morgan Stanley cut its target price from 590p to 525p.

There would be ‘long-term problems’ if the tax included power generators, according to the chairman of British Gas owner Centrica.

Scott Wheway told shareholders at the firm’s annual general meeting that a legal bid would not be launched against the Government’s windfall.

Meanwhile Capricorn Energy, one of the mid-cap’s biggest risers, brushed aside such investor fears as all eyes remained on the approval of its merger with fellow oil and gas company Tullow Oil.

With Vladimir Putin’s war in Europe showing no signs of ending, shares in the FTSE 250-listed Ukrainian miner Ferrexpo slumped 4.7 per cent, or 9p, to 184.2p.

Passport photo booth and launderette operator Photo-Me International reported a 24 per cent rise in revenue for the six months to the end of April. Shares ticked up 14.7 per cent, or 10.4p, to 81p.

There was better news for AMTE Power, whose shares soared 17.8 per cent, or 12p, to 79.5p after the developer and manufacturer of lithium-ion and sodium-ion battery cells teamed up with the engineering company Viritech to support the development of hydrogen fuel cell electric vehicles.

The duo has signed a memorandum of understanding to support the development of hydrogen fuel cell electric vehicles, including Viritech’s flagship hypercar.