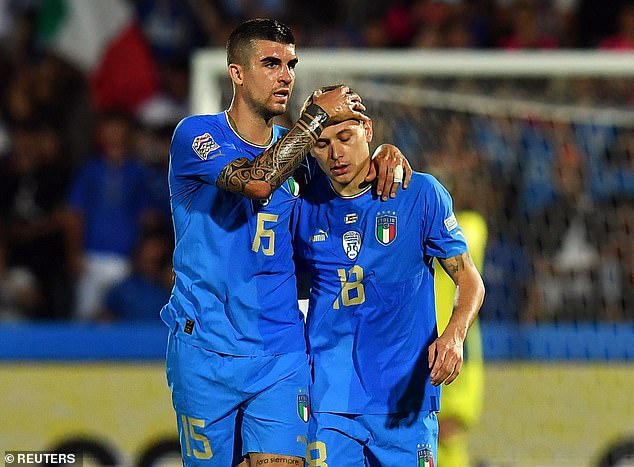 Italy moved a point clear at the top of Group A3 after a 2-1 win over Hungary in their Nations League clash in Cesena.

The European champions, who failed to qualify for the World Cup, went ahead through a fierce drive from Nicolo Barella, while Lorenzo Pellegrini doubled the lead just before the break.

Hungary – who had beaten England in Budapest on Saturday – reduced the deficit through an own goal from Azzurri defender Gianluca Mancini on the hour, but could not conjure an equaliser.

A late penalty from England captain Harry Kane secured a 1-1 draw against Germany in Munich.

Germany, who drew with Italy in Bologna in their opening fixture, took the lead five minutes into the second half when Borussia Monchengladbach midfielder Hofmann fired past England goalkeeper Jordan Pickford.

But with just two minutes left, England were given a way back into the match when Tottenham forward Kane was fouled by Nico Schlotterbeck inside the area, and a penalty was awarded following a VAR review.

Kane converted from the spot to bring up his 50th England goal, but Gareth Southgate’s men sit bottom of the table with just a point from their opening two fixtures.

In Group B3, Bosnia-Herzegovina beat Romania 1-0 in Zenica with a second-half goal from substitute Smail Prevljak to record a first win in eight Nations League games.

Turkey thrashed Lithuania 6-0 in Vilnius to make it two wins out of two in Group C1.

Dogukan Sinik struck twice in the opening 14 minutes, with veteran Fenerbahce forward Serdar Dursun adding another from the penalty spot before completing his own double with nine minutes left.

Substitute Yunus Akgun and Halil Dervisoglu wrapped things up with late goals in the closing stages as Lithuania suffered a 14th defeat in 17 internationals.

Gerson Rodrigues’ penalty with 15 minutes left gave Luxembourg a 1-0 win over the Faroe Islands in Torsvollur, where the hosts finished with nine men after Rene Joensen and Solvi Vatnhamar were sent off during the second half.