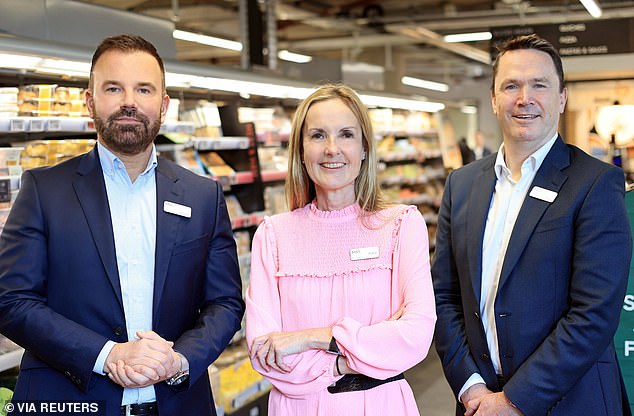 Not just any pay packet! Marks and Spencer trio in line for £15m bonanza if they hit share price target

The trio in charge of Marks and Spencer are in line for a pay pot worth more than £15million.

Co-chief executives Stuart Machin and Katie Bickerstaffe, as well as finance and strategy boss Eoin Tonge, have taken the reins from Steve Rowe, who stepped down last month.

They are in line to share £12.4million if they hit personal and profit targets set by M&S’s pay committee.

But if its share price tops 237p, a 50 per cent jump from its price in April, they will unlock an extra pot, taking the total to £15.1million.

Shares are currently trading at 146.45p. Machin, who will be in charge overall, will be paid a base salary of £800,000, but with benefits and bonuses his total pay could reach £5.5million.

And Tonge will be paid £660,000, with his maximum payout totalling £4.5million. The pay policy was made public in the M&S annual report published yesterday.

The document also revealed Rowe was paid £2.6million in the year to April 2, more than double his £1million earnings a year earlier.

M&S increased the base pay for its 40,000 store colleagues in April to ensure it is above the national real living wage.

Rowe joined the retailer in 1983 and stepped down last month after six years as chief executive having unveiled its highest annual profit since 2016.

Rowe is being replaced by Machin, promoted from M&S’s head of food, and Bickerstaffe, its former head of clothing and online sales.

Tonge has been handed an enlarged role alongside his duties as finance boss as the trio take on the ‘shaping the future’ phase of M&S’s transformation.

They will be hoping to return M&S shares to a peak hit in January when it was celebrating bumper Christmas sales and forecasting huge profits.

They briefly hit 257p, which would unlock the top bonus pot for the trio, but have since fallen by 43 per cent.

Rowe last month warned that after the Jubilee and summer holidays, consumers are going to be tightening their belts.