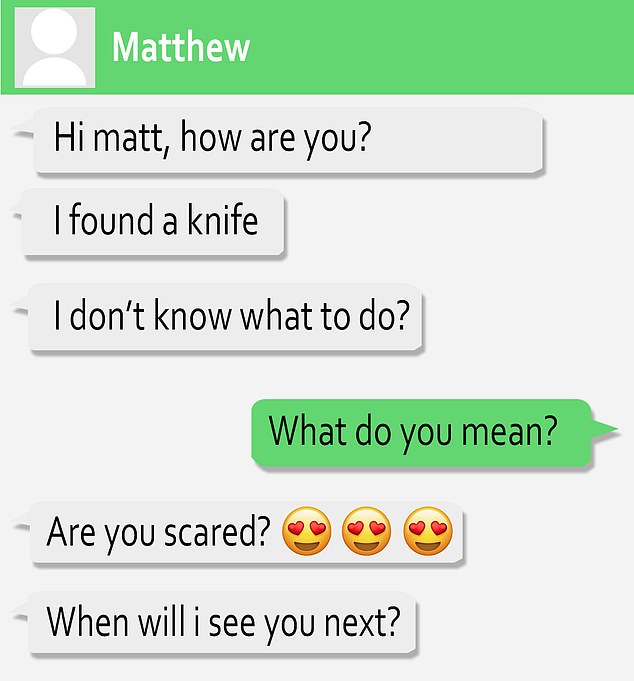 A Waitrose worker with 17 years of service has won a £47,000 payout after he was wrongfully sacked for scaring his boss by texting him that he had ‘found a knife’.

Mohammed Zahangir Kabir was let go from his role as a sales assistant at the supermarket after his ‘joke’ texts were read as a genuine threat.

His boss, assistant team manager Matthew Ford, told senior staff at the store that he was scared Mr Kabir would turn up to work with a knife after he received a text that read ‘when will i see you next’.

Mr Ford also thought a series of emojis depicting a smiley face with heart-shaped eyes Mr Kabir had sent him to be ‘psychotic’, an employment tribunal heard.

Police were called and Mr Kabir was searched when he arrived for his shift.

Despite police taking no further action, he was sacked for misconduct after it was found he had caused Mr Ford ‘distress’.

But a tribunal has now found this was unfair as his bosses did not take into account his apology and genuine upset at having unintentionally scared his boss in what was meant to be a joke.

The hearing, in east London, was told Mr Kabir worked at the Waitrose store in South Woodford.

Originally from Bangladesh, Mr Kabir moved to the UK in 2002 and is married with two children. When he was sacked in June 2020, his children were aged five and 11.

But when his boss asked him what he wanted, he wrote back ‘I found a knife.’ and ‘I don’t know what to do’.

When Mr Ford asked him what he meant, he sent him four emojis of smiley faces with hearts for eyes and said ‘are you scared’.

Mr Kabir then went on to ask ‘what time you finish today’ and ‘when will I see you next’.

The tribunal heard: ‘Mr Ford considered the emoji of the smiley face with the heart eyes to be ‘psychotic’. It was not clear why he thought that.’

The following day, Mr Ford told his bosses he was ‘scared and unsure what to do’ and told them he was worried about Mr Kabir arriving for work with a knife.

When Mr Kabir turned up to work to start his shift at 7pm, he found a police officer at work waiting for him and was subsequently searched.

The tribunal heard he was ‘extremely nervous’ but had no knife on him.

The officer explained it was an offence to threaten someone over the telephone, to which he replied that it was a joke.

Mr Kabir worked at the Waitrose store in South Woodford, east London, and had been in the company for 17 years

The tribunal heard: ‘The police accepted that [Mr Kabir] meant no malice towards Mr Ford and he was not cautioned. The police took no further action in this matter.

‘He was also now aware that Mr Ford had taken the messages seriously. [He] decided to apologise to Mr Ford to assure him that he had not meant him any harm and because he had not intended to alarm him.’

Mr Kabir texted Mr Ford to apologise, to which his boss replied ‘no problem kabir I was a little worried when you text, was a little out of context. Very serious and a worrying conversation need to be little careful’ with a thumbs up emoji.

Despite no formal complaint being made, an investigation into potential misconduct was opened by Waitrose.

At an investigation meeting Mr Kabir said his intention was to tell Mr Ford that he found a knife to start cooking a meal for his children and the messages were meant as a joke.

The tribunal heard Mr Kabir was visibly upset during the meeting by the thought that he had caused a colleague to feel scared, so much so that he left the room to be sick.

He said he had joked with Mr Ford ‘because he thought that he was a very nice man and that they joked with each other’.

Hr Kabir added that he felt awful for his boss and tried to call him as soon as he thought that the messages could be taken the wrong way, but Mr Ford did not accept the call.

Despite hearing how the two men were friends who called each other ‘mate’, Waitrose decided there was a case for serious misconduct because Mr Ford took the messages as a threat.

At the disciplinary hearing, it was ruled that the phrases ‘I have a knife’ and ‘are you scared’ were intimidating, ‘especially when combined with the question to Mr Ford about what time he finished his shift’.

As a result, Mr Kabir was sacked for serious misconduct.

But the employment tribunal has decided the supermarket ‘placed too much weight’ on Mr Ford’s reaction and sacking Mr Kabir for ‘bizarre, unexplained and arguably stupid text messages’ was unnecessary.

Employment judge Julia Jones concluded: ‘There was no actual threat in the messages. They did not make sense but that did not mean that they were threatening.

‘In this Tribunal’s judgment, [Mr Kabir] had displayed thoughtless conduct. He had sent some stupid, random text messages to his manager without thinking of how they could be received.

‘In this case, apart from Mr Ford’s reaction, [the company] did not have evidence that the messages were threatening or intimidating.

‘Mr Kabir was not a threat to anyone. [His] text messages to Mr Ford did not make sense but it was not reasonable to conclude, in the absence of any other evidence apart from Mr Ford’s reaction; that they were threatening.’

Mr Kabir has been awarded £47,192.90 in compensation for unfair and wrongful dismissal from Waitrose parent company John Lewis.

A Waitrose spokesperson said: ‘We strive to be a fair employer and the safety of our Partners is always paramount.

‘We recognise that the disciplinary process would have been difficult for Mr Kabir and ensured he was offered support.

‘We believed these text messages breached our clear code of conduct, and that we had acted fairly in the circumstances.’