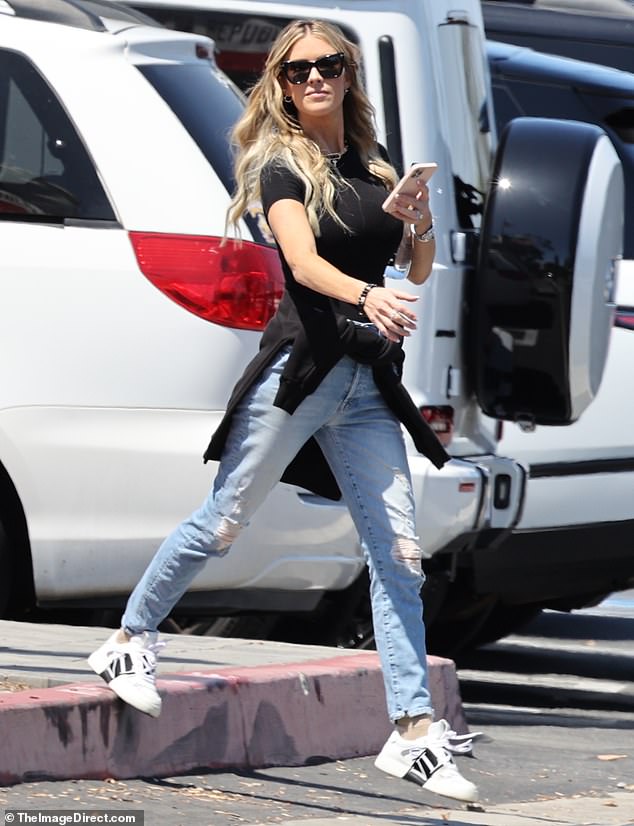 The TV personality opted to dress comfortably and wore a pair of light blue, ripped jeans and a plain black T-shirt with Valentino sneakers.

The star recently settled into a $12 million dollar Newport Beach home with her realtor husband, Joshua Hall, giving fans a tour on Instagram.

Gorgeous: Christina Hall looked beautiful as she wore a a pair of ripped jeans and Valentino sneakers running errands

Hall held her phone as she stepped off a curb.

The real-estate star had hair blonde hair curled into flowy waves, which was pulled back away from her face into a half braided ponytail.

She wore a pair of big, cat-eyed shaped sunglasses as she strolled underneath the hot, summer sun.

On the go: The star was seen looked fashionable on an errand run in California yesterday

Big moves: The Flip or Flop star just made a big move with husband, Josh Hall, to a $12 million dollar home in Newport Beach

The blonde beauty had a tan-colored purse slung over her left shoulder and a water bottle in the crook of her elbow as she ran her essential errands for the day.

Christine and her husband recently just celebrated a huge move into their new home in Newport Beach. The mansion is definitely large enough for them and her three kids.

Christine has three children, two with her first husband, Tarek El Moussa, and one with her second husband, Ant Anstead.

Just the five of us: Christine and her husband recently just celebrated a huge move into their new home in Newport Beach. The mansion is definitely large enough for them and her three kids

Fresh start: The real-estate star just moved into a new home with her husband; seen in a kiss

The reality TV show has been traveling back and forth from California to Tennessee. Hall has been filming a new series titled, Christine In The Country.

The Flip Or Flop star posted a series of photos on her Instagram last month in May to share her fun-filled work trip to Tennessee. Her husband, Josh, also tagged along on the short trip.

In the caption, the she stated, ‘Grateful to live/work in California but still get to film a TV show while enjoying out second home in Franklin, TN.’

Cute couple: The couple are both in the real-estate business and tied the knot after less than a year of dating

So much room: There is a big pool in the backyard wit a lush green lawn

Time to celebrate: The love birds opened a bottle of champagne outside

A scoot for Ant’s boy: And here Hall helps out her youngest child, whom she had with ex-husband Ant Anstead

According to People, the show will be completed and will have a grand premiere sometime in late 2022.

‘I love that I get the best of both worlds-the coast and the country. It’s an incredible opportunity to get to work in Tennessee, our home away from home,’ the real-estate guru said.

The Flip or Flip series, which starred Christine and her now ex-husband, Tarek El Moussa, concluded its final season in March.

Saving all my love for you: Christina and her man shared a loving embrace

The good life: They flashed their rings, her Christian Dior purse and their gifts