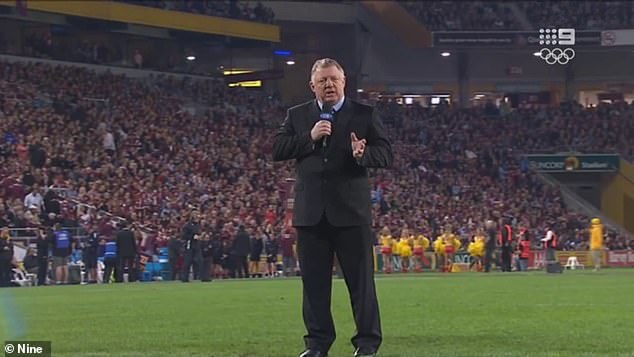 ‘Gus’ Gould confirmed on Twitter he wouldn’t be delivering his hype piece to camera just before kick-off when asked by a fan whether he would have the final say before the game gets underway.

‘You doing the final word for Origin tonight, not watching if you’re not, that s*** could get me hyped for war,’ wrote the Twitter user.

‘No I’m not. It will be a cracking game. Don’t miss it,’ Gould replied.

Gould has been delivering his final word before each State of Origin game for many years.

One of the most authoritative voices in the game, ‘Gus’ delivers his rev-up right before kick-off, which aims to give viewers an insight into the game and get hairs standing on end.

Gould coached NSW to six series victories during his time in charge, and is now a Channel 9 commentator to go along with his gig as the general manager at the Bulldogs.

When you used to do the last word on the origin coverage I used to put the bins out with so much authority after it! Could fire anyone up 😂👍

No Rabs and no Gus. Is it really Origin?

Many fans likely breathed a sigh of relief that it won’t take place this year, while others decried that Origin just won’t be the same with ‘Rabs’ and ‘Gus’s final word’.

The game is due to begin at 8.10pm (AEST), with coverage to get underway on Channel 9 from 7pm.

The legendary Ray Warren won’t be calling the game either, after announcing his retirement