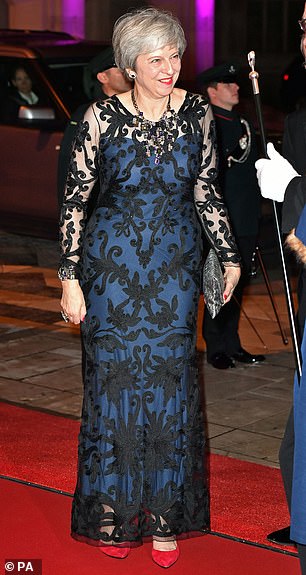 Former PM Theresa May was paid £109,000 for a FIVE-hour talk – part of ‘more than £2.1million she has raked in on the speaking circuit’

2018: While there are no pictures circulating of Theresa May in her full-length ballgown at the confidence vote this week, observers said that it was similar to this dress which she wore at the Lord Mayor’s Banquet at the Guildhall in London on November 12, 2018

Theresa May was paid £109,000 for a five-hour speaking engagement, it has been revealed.

According to the Register of Members’ Financial Interests, the former Prime Minister received the sum last month for a speaking engagement with the Danish Bar and Law Society in Copenhagen.

Mrs May, 65, has reportedly earned more than £2.1 million on the lucrative speaking circuit in the three years since leaving Downing Street.

Other earnings declared on the register include an advance payment of approximately £160,370 from JP Morgan Chase in April 2020 for two speaking engagements which were cancelled.

She also received around £46,800 for a virtual speaking event from Cuyahoga Community College Foundation in Cleveland, Ohio. It lasted four hours, according to the register.

Mrs May’s stint as PM had been brought down in 2019 by Boris Johnson and his allies over how to execute Britain’s departure from the European Union.

She wore a glittering floor-length blue ballgown and sequinned heels to cast her ballot in the vote of confidence this week and did not say which way she voted this time, three years after surviving a vote for herself with a bigger margin.

The Conservative heavyweight said she was not ‘answering any questions’ as she left Committee Room 10 at Parliament, but said she was off to speak at a dinner marking the Queen’s Platinum Jubilee and was seen leaving in a car.

While Mr Johnson is not thought to have ever confirmed he voted against Mrs May, he had resigned from government and was opposing her Brexit plan at the time – so it is assumed that he did.

Now, it has been suggested that Mrs May could return to the Cabinet in a senior role such as Chancellor of the Exchequer if Mr Johnson does eventually lose his leadership of the Conservative Party.

Mrs May faced a vote of confidence in her leadership on December 12, 2018. News that the contest would take place was announced early that morning by Sir Graham Brady – then, as now, the chairman of the backbench 1922 Committee of MPs – with the ballot taking place the same day between 6pm and 8pm.

A total of 317 Conservative MPs were able to vote, meaning Mrs May needed at least 159 to win a majority.

This was enough for Mrs May to continue in the short term as both party leader and prime minister.

But just five months later she announced her resignation, following repeated failures to get her Brexit deal through the House of Commons and a disastrous performance by the Conservatives in the European elections.