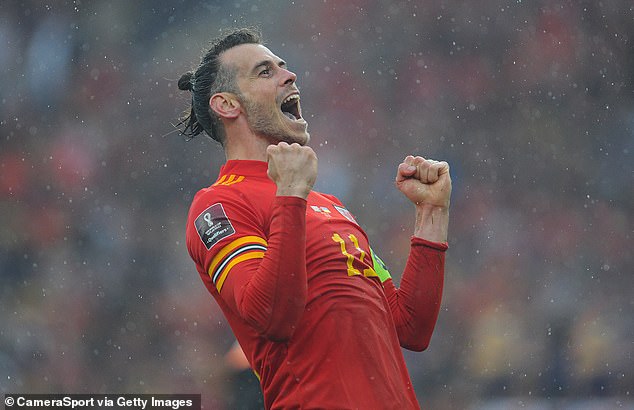 Bale will leave Real Madrid at the end of his contract this month but needs to join a new club for the coming season after Wales booked their place at the World Cup on Sunday.

The Welshman is said to not be short of options and was most recently linked to LaLiga minnows Getafe amid suggestions he may be keen to remain in Madrid, where he has lived and raised his children over the past nine years.

Getafe club president, Angel Torres appeared to back up those claims when he said Bale had been offered to the club.

On Wednesday, Torres said: ‘I spoke with the player’s agent this morning. He has been offered to us. We will consider it. I am going to have to speak to the technical staff.’

Getafe club president, Angel Torres claimed the Welshman had been offered to the side

However, Bale’s agent Joshua Barnett, son of Jonathan Barnett, has reportedly played down the move to the Spanish side.

Football journalist Fabrizio Romano claimed that Barnett laughed off the rumours on Wednesday evening, saying: ‘I don’t even have the president of Getafe’s number!’

The report hands Cardiff City as boost in their pursuit of Bale as the Welsh side are desperate to bring him back to his hometown club in what would be a stunning coup, according to Wales Online.

It was assumed Bale would have been keen to secure a return to the UK, with Tottenham, Cardiff and even Wrexham all suggested options.

But the option to stay in the Spanish capital would also allow him and his family to remain settled.

This map shows Bale would not have far to travel from his £6.5m home in the La Finca neighbourhood if he were to join Getafe, and he would also be able to continue playing golf at his member-only club Ciudad Grupo Santander

Bale wouldn’t have far to travel if he did join Getafe. The club’s stadium is about a 30 minute drive from the Santiago Bernabeu, and about 20 minutes from where the Welshman lives in a £6.5m mansion with his family in the La Finca neighbourhood.

His golf club – the members-only Ciudad Grupo Santander – is also nearby, allowing him to continue his passion.

He has embraced the culture of the country, with his kids happy at school in Madrid and Bale himself enjoying the chance to attend golf events. He has been seen attending a number of events, including the Acciona Open and the Spanish Open in recent months.