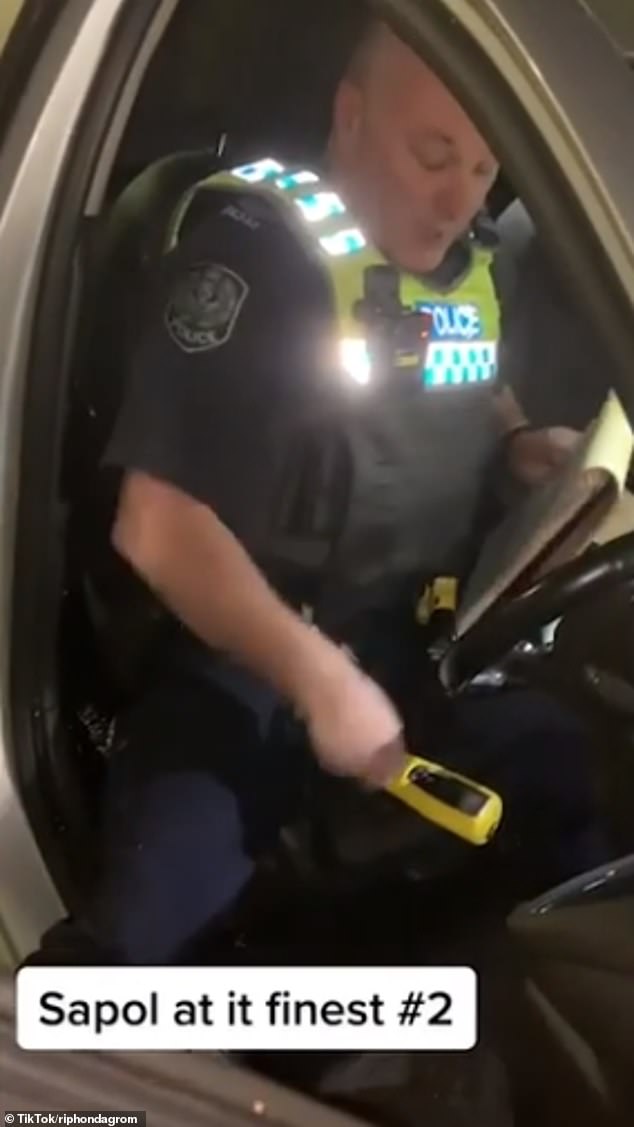 Moment Aussie motorcyclist confronts cop for having a bald tyre – after he was pulled over and handed a defect notice: ‘You’re a hypocrite’

A South Australian motorcyclist who went viral on Tik Tok has claimed a type of moral victory over the ‘hypocrite’ police officer who gave him a defect notice – even though it cost him $62.

When Theo Glibo was approached at a northwest Adelaide service station to be given a defect notice for his Honda Grom bike he pointed out the police officer’s car should also get a notice over a bald tyre, which the officer conceded but did not do.

Mr Glibo, 24, filmed the exchanges for Tik Tok and posted three videos, with the first one labelled ‘Sapol at it again’ gathering 1.5 million views in short order.

The first video shows Mr Glibo goading the officer to issue a defect notice for his own right front tyre, which is clearly worn.

‘I’m copping a defect and this cop has a bald tyre and he’s not even gonna defect his own car,’ Mr Glibo says.

‘I’m not going to put a sticker on it for something that’s going to be dealt with tomorrow,’ the officer says as the pair bicker.

The officer agreed the tyre was bald.

‘Why not? That’s what you’re doing with mine, you’re a hypocrite,’ Mr Glibo says.

The argument continues in the second video, which opens with a close-up of the offending tyre.

Mr Glibo asks the officer to assess its condition as unroadworthy, which prompts a frank admission.

‘So I will defect that when I get back to my office.’

This doesn’t go down well.

‘If this was anybody’s else’s car you’d defect it,’ Mr Glibo says.

‘Where’s the wear bar on that?’

The officer again says he will do it back in the office but Mr Glibo insists he do it on the spot.

In the third video posted by Mr Glibo, he and officer disagree over the defect notice, which was issued because the bike had a blue light under its headlight.

Mr Glibo argues that the blue light is a factory setting.

‘That’s how I bought it sir, he says.

The officer does not disagree but still issues the $62 notice.

South Australia Police have issued a statement in response to Mr Glibo’s videos, which appears to vindicate the assertion the police car was defect worthy.

‘South Australia Police are aware of the social media post relating to an interaction between a SAPOL employee and a member of the public where the police vehicle was identified to have a bald tyre,” it read.

“SAPOL have taken steps to address this matter.”