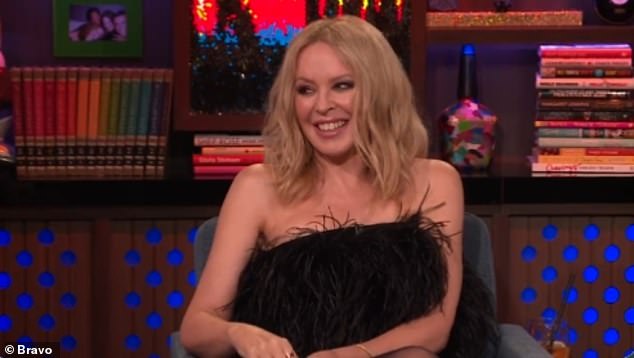 Kylie Minogue reveals that she almost collaborated with Madonna ‘on a couple of occasions’ but it never happened: ‘I would be up for that!’

Kylie Minogue and Madonna are two of the biggest pop artists of all time.

And fans will be excited to know that the pair came close to collaborating together on more than one occasion.

During an appearance on Watch What Happens Live this week, Kylie told host Andy Cohen that she was keen to get in the studio with the Hard Candy hitmaker.

Hit machine: Kylie Minogue revealed on Watch What Happens Live this week that she almost collaborated with Madonna

‘There’s been a couple of occasions, but it hasn’t quite happened,’ she said.

‘I would be up for that, the level’s high here,’ she added.

Madonna has been open about her adoration for Kylie for years, with Madonna famously wearing a Kylie Minogue tank top during her performance at the 2000 MTV Europe Music Awards.

She later gave Kylie a shout out on stage during the Australian leg of her Rebel Heart tour back in 2016.

Almost! ‘There’s been a couple of occasions, but it hasn’t quite happened,’ she said, before adding: ”I would be up for that, the level’s high here’

‘I love Kylie, I wish she was here…Where are you Kylie?’ Madonna told the screaming crowd.

‘Come back Kylie, I just want to tear you away,’ she added.

Meanwhile, Kylie has officially launched her wine range in America.

The pop singer, 54, announced the news on Instagram on Tuesday, and celebrated the launch with a performance at New York City’s famous Café Carlyle venue.

Fan girl! Madonna (pictured) has been open about her love for Kylie for years

The Spinning Around star said bringing her wine to the U.S. market was a ‘pinch me’ moment.

Mogul: Kylie has been in America to launch her hugely successful wine line