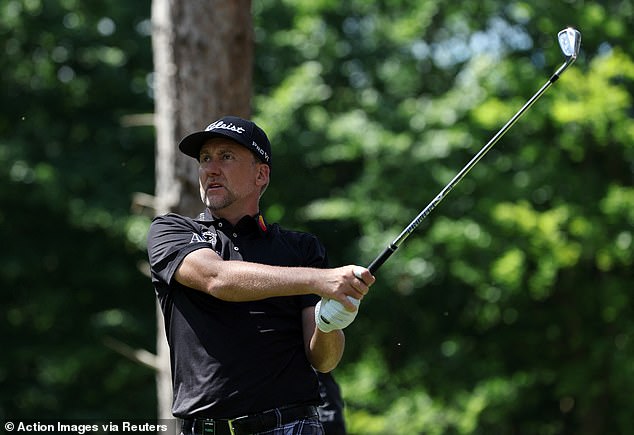 Ian Poulter says it is only a matter of time before more of golf’s big hitters cross over to the Saudi-backed breakaway series that gets under way in St Albans on Thursday.

With Bryson DeChambeau and Patrick Reed expected to be next in line to join the controversial start-up, which includes Dustin Johnson, Phil Mickelson, Lee Westwood and Sergio Garcia, golf is teetering on the brink of a major power shift.

While the many legal complexities are being assessed by the traditional tours behind the scenes, and could yet see the likes of Poulter and Lee Westwood ruled out of future Ryder Cups, Poulter is convinced more star names will follow the gold rush.

The inaugural event of the LIV Invitational Series, staged at Centurion Club, is already being described as the richest event in golf with a £20million prize pot.

Poulter said: ‘I definitely see other top players watching on this week and wanting to be a part of it. There’s a huge investment coming into the game of golf and sport in general.

‘Definitely, other players will be looking in with interest this week and I think they will want to come and see what it’s all about.

‘The team format has always been something which most people have always gravitated towards. So it is a vast sum of money, but it’s a great platform to be able to build the game of golf.’

Golf has entered a period of civil war following the creation of this new series, with the PGA Tour having threatened sanctions against those who tee up.

The DP World Tour, formerly the European Tour, has been silent publicly on the issue, though their stance is of huge interest to Poulter and Westwood, owing to the potential for Ryder Cup repercussions.

Both golfers admitted they were in the dark over what their move to the LIV series could mean in that regard, with Poulter saying: ‘We don’t know.

‘I’d like to think it wouldn’t, all the golf I’ve played around the world in all the different countries and tours I don’t see why this should be any different. We don’t know how DP World Tour will view it, it’s obviously a factor.’

Westwood said: ‘What I will say is myself and Ian have been members of the PGA Tour while we have been on the European Tour and that has had no effect in the past on whether people have been captains. LIV Golf is another tour so why should it be any different?’

Westwood, 49, was more open than most in discussing the financial aspect of the move. He said: ‘If there is a pay increase, then at my age I would be stupid not to take it, or certainly have a good look at it and then not take it.’