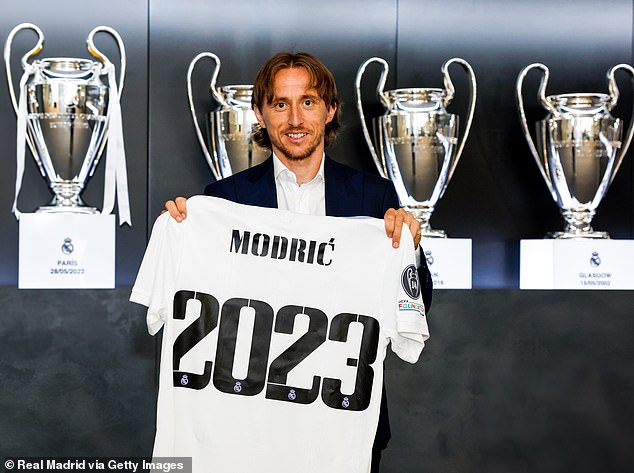 Luka Modric signs a new contract with Real Madrid until 2023 as the veteran midfielder, 36, extends his stay with the LaLiga giants into an 11th season after helping the club to the Champions League and Spanish title

Real Madrid will look to defend their LaLiga and Champions League crowns next season with Luka Modric as the heart of their midfield after it was announced that he has signed a new contract.

The 36-year-old has penned a new one-year extension at the Santiago Bernabeu – keeping him in the Spanish capital until June 30, 2023.

The Croatia international will now be plying his trade for the Spanish giants for an 11th-straight season as his enduring quality continues to shine.

Playmaker Luka Modric has signed a one-year extension at Real Madrid until June 30, 2023

‘I’m very happy and proud to continue at least one more year in Real Madrid,’ he said in a video posted on the club’s Twitter account.

‘I want to continue to give everything for the club – I am proud to continue wearing this shirt.’

Despite his advancing years, Modric continues to play a starring role for Los Blancos – making 45 appearances in all competitions this campaign, providing 12 assists and scoring three goals.

Real’s No 10 has enjoyed a trophy-laden spell in the Spanish capital, having won 15 major trophies in 10 seasons at the club – including five Champions League triumphs.

The 36-year-old featured 45 times for Real this season in all competitions, scoring three goals

Modric has played 436 games in all competitions for Real, scoring 31 goals and providing 73 assists. He is the 20th player with the most appearances in the club’s history, two behind Cristiano Ronaldo.

He also won the 2018 Ballon d’Or, becoming the first player other than Lionel Messi or Ronaldo to claim the award in more than a decade.