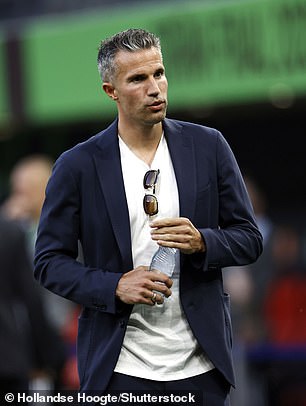 ‘My son and daughter are important right now’: Robin van Persie reveals he rejected Erik ten Hag’s offer to be part of his Manchester United backroom staff as he and his wife ‘felt a little stability would be nice’ for their kids by remaining in Holland

Manchester United fan favourite Robin van Persie has revealed it was a family-based decision as to why he didn’t re-join the club as part of new manager’s Erik ten Hag’s backroom staff.

The Ten Hag era began on May 16 with Steve McClaren and Mitchell van der Gaag appointed as his assistant managers.

Ten Hag also hoped to convince ex-United striker Van Persie to return to Old Trafford as one of his coaches but was unsuccessful in doing so.

And explaining why he declined, Van Persie explained that family commitments played a key role in his thinking.

The 38-year-old’s son Shaqueel is currently in the Feyenoord academy, while his daughter Dina is a keen horse-rider.

‘My son and daughter are important right now,’ Van Persie told the Life After Football magazine. ‘The fact that they have both found their passion is great. A hobby is nice, but you hope that they really find a passion.

‘Dina succeeded in doing that with horse riding, she’s totally into it, and Shaqueel has the same thing with soccer. My wife, Bouchra, is developing all her talents with our projects and that’s great to see. We’re enjoying ourselves together.

Shaqueel van Persie (left, pictured in 2019) is currently part of the Feyenoord academy

‘In London, when I played at Arsenal, we moved five times. We also lived in Manchester and Istanbul. All in all, we were away for almost 14 years.

‘But then we thought “what’s good for the kids now?” and felt a little stability would be nice.’

The Dutchman was the catalyst for the Red Devils winning their last Premier League title in 2012-13 – scoring 26 times in 38 matches.