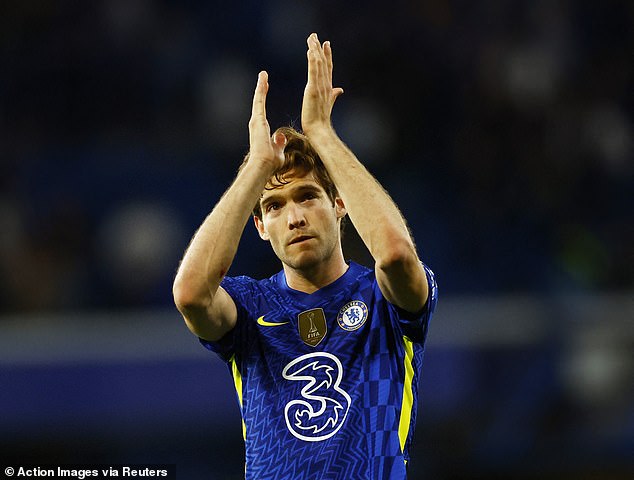 Marcos Alonso has confirmed he wants to leave Chelsea this summer and return to Spain but insisted he would be happy to see out his contract at Stamford Bridge.

The 31-year-old left wing-back gave an interview to Spanish radio station Onda Cero and underlined his desire to part ways with Chelsea, where has been playing since 2016.

‘On paper, I have a contract for one more year and that is where we’re at today. I’ve already said that I would like to play in Spain again, but it doesn’t depend entirely on me,’ Alonso said.

‘I can’t complain about anything at Chelsea, but the desire to play in Spain is there. It doesn’t depend entirely on me and I’m happy at Chelsea, honestly.’

Marca reported back in May that Alonso is Barcelona boss Xavi’s first choice to come in and be the new left-back at the Nou Camp.

The Spanish publication said that while agreeing personal terms is a formality for Alonso and Barcelona, the Catalan outfit having to agree a fee with Chelsea could prove a stumbling block.

Cash is tight at Barcelona, despite returning to next season’s Champions League and Xavi has largely had to rely on free transfers to freshen up his squad.

Alonso said on Spanish radio that while he wants to go back to Spain, he is happy at Chelsea

Chelsea are already facing a summer of major upheaval in defence. Andreas Christensen is already heading to the Nou Camp from Chelsea, while Cesar Azpilicueta could also join Barca on a free from west London.

Centre-back Antonio Rudiger, meanwhile, has gone to Real Madrid on a four-year contract after failing to agree new terms with the Blues.

Barcelona, meanwhile, are plotting their summer rebuild under Xavi after returning to the Champions League for next season with a second-place finish in LaLiga.