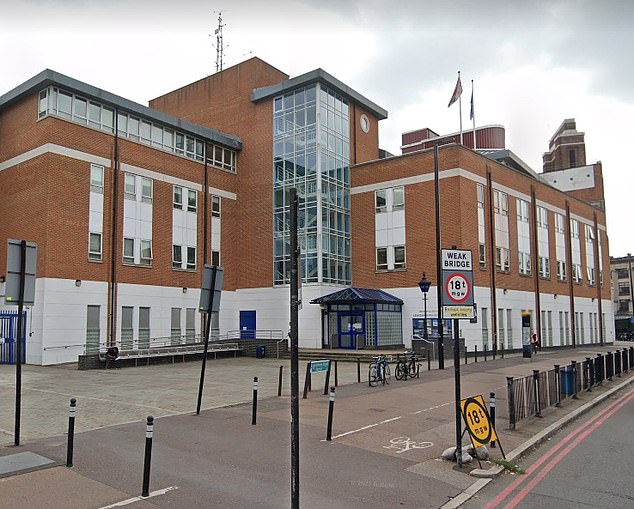 By Charlotte Mclaughlin For Mailonline

A serving Metropolitan Police officer has appeared in court accused of hitting a female colleague in the face while they were restraining a suspect while he was in custody.

Sergeant David Gibson, 28, allegedly hit Jemma Blake’s lower jaw with his hand at Lewisham station on September 14 last year and told her to ‘Get off’.

The pair were both on duty while they detained a man on the floor as he lay face down.

Gibson then used both hands to control him before his colleague reached down towards the suspect’s neck to remove his necklace.

Westminster Magistrates’ Court heard this was when Gibson allegedly pushed out with his open hand, striking Ms Blake’s lower jaw.

Wearing a grey checked suit, he pleaded not guilty to a single charge of assault by beating of an emergency worker today.

Sergeant David Gibson, 28, allegedly struck Jemma Blake to her lower jaw with his open hand while they were both on duty at Lewisham station (pictured the police station in Lond) on September 14 last year

The serving Metropolitan Police officer has appeared in court accused of hitting a female colleague in the face while they were detaining a suspect. Pictured: New Scotland Yard in London

The court heard Gibson, from Dartford in Kent, is still attached to Lewisham police station but currently working from home.

District Judge Daniel Sternberg said the case was suitable to be tried at the magistrates court but Gibson opted for a trial in front of a jury.

He was granted unconditional bail ahead of his next appearance at Inner London Crown Court on July 6.

The Met said Gibson is a sergeant working at the Met Detention Unit based at Croydon and is currently on restricted duties.