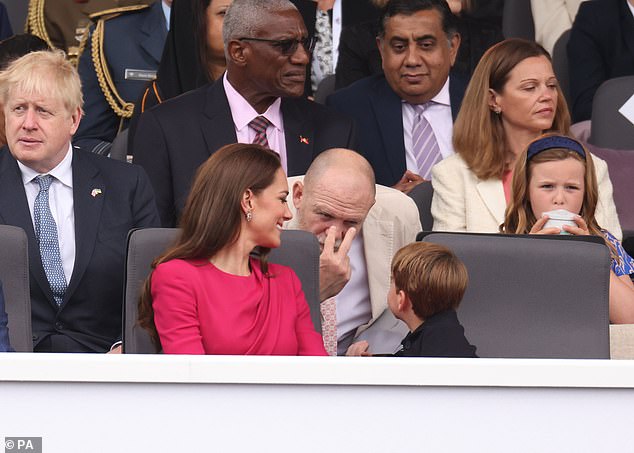 Mike Tindall said Prince Louis’s scene-stealing antics at the Jubilee Pageant were due to a sugar high.

The 43-year-old former rugby player opened up about the celebrations on his podcast The Good, The Bad and The Rugby, which he presents alongside former teammate James Haskell and TV presenter Alex Payne.

The sportsman, who is married to Zara Tindall, 41, made headlines after he gave the Duke and Duchess of Cambridge’s youngest son a playful stare down during the pageant on Sunday.

Prince Louis, four, put on an animated display, pretending to be a lion, bickering with his cousins and even sticking his tongue out to his mother Kate Middleton, 40.

Speaking on the podcast, Tindall sympathised with Louis, saying the pageant had been long for the little royal, and that all the royal children suffered a ‘sugar high’ from eating sweets.

Former England rugby player Mike Tindall, 43, said Prince Louis’s antics at the Jubilee Pageant were due to a sugar high as he reflected on the celebrations on his podcast

Prince Louis, who attended with Prince Charlotte, seven, and Prince George, eight, and their parents, was sat next to his mother, Kate, but struggled to keep still during the show, which ran all afternoon.

Mike, who has two children under four, sympathised with the little Cambridge.

‘Louis, he was just wanting to have fun. And my two are always mischievous so it’s trying to keep a lid on,’ the father-of-three said.

And Louis’s visible excitement might have been down to the sweets the kids enjoyed during the show, the sportsman added.

‘There were a lot of sweets out back though, so there was a real sugar high.’

Mike went on, saying staying quiet at the show had been ‘tough’ for the young royals.

Mike said the pageant had been ‘tough’ for the little royals, because the event ran long. The young royals also had a lot of candy

Prince Louis, four, put on an animated display during the pageant, and had to be managed by his mother, Kate Middleton, 40, left and several other adult members of the royal family

‘They’re all young… it’s a long time. But as any parents knows you just do whatever needs to be done,’ he said.

Mike was the royal family’s MVP during the Jubilee celebrations, with fans branding him the ‘cool, fun uncle’ after he posted a a series of hilarious snaps.

On top of entertaining an unruly Prince Louis, Mike poked fun at Princess Eugenie’s fashion sense, and chatted with Prince Harry and Meghan Markle during the royal celebrations in London.

Mike dutifully accompanied Zara to five different events over the course of the four-day weekend: Trooping the Colour, the Service of Thanksgiving, Epsom Derby, the Platinum Party and the Platinum Pageant.

During the Platinum Pageant, father-of-three Mike was also snapped enjoying a tender moment with his eight-year-old daughter Mia Tindall

And at all times Mike appeared in typically jovial spirits and was on hand to help out with all the royal children.

While Mike and Zara have no official duties, they are regulars at royal family events, such as church services and important milestones such as the Jubilee. They at Gatcombe Park in Gloucestershire, Princess Anne’s royal estate.

Among some of the funniest snaps that Mike during the four-day Jubilee bank holidays were photos he shared of himself on Instagram, wearing Zara’s hats.

These included the father-of-three wearing his wife’s fuchsia headgear after they attended Trooping the Colour on Thursday, as well as donning her bright red floral head after Friday’s thanksgiving service at St Paul’s.

Then, on Saturday, the former athlete traded his top hat with Zara’s blue one as the pair attended Epsom Race Course ahead of that evening’s concert.

Captions accompanying the images referred to which days of the celebrations they corresponded to, suggesting the royal was ticking each day off a to-do list.