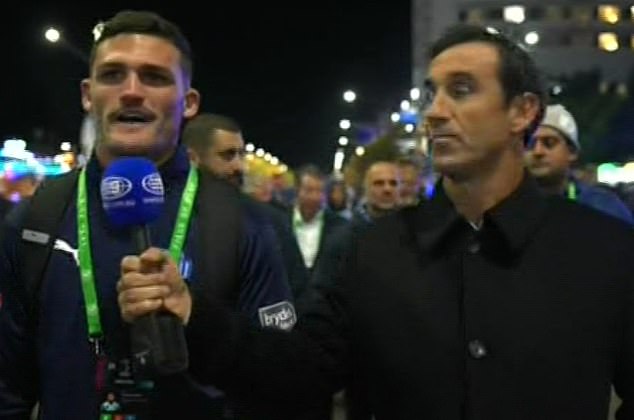 Nathan Cleary believes New South Wales will have a good night at Accor Stadium if they can keep Cameron Munster quiet as the Blues squad took a very unconventional route to the ground.

Brad Fittler’s side are the betting favourites to get up in Game I of this season’s Origin series, despite missing star names in Tom Trbojevic and Latrell Mitchell through injury.

And as the New South Wales stars took a stroll to the ground among hordes of Blues fans, Cleary told Andrew Johns of his excitement to get out on the park tonight.

‘Everything is blue around here, fans are going crazy I can’t wait,’ he said on Channel 9. ‘It [nerves] is starting to build, I just want to get out there and play.

‘I’m looking forward to it. He [Fittler] just said the work is done, it’s all about belief and heading in the same direction. The debutants haver been good all week and they’re in for big ones.’

Cleary picked out Melbourne Storm stand-off Munster as Queensland’s danger man, but insisted that if his side get things right they should have a fruitful evening.

‘I think Cameron Munster is their main man, in saying that we are ready for ourselves and it’s all about us now.’

Meanwhile, Munster predicts that Broncos gun Selwyn Cobbo will have a big night on his Origin debut.

‘I can’t wait, if you can’t get pumped up for this you might as well not play the game. I think Selwyn Cobbo will have a massive one for us tonight.’