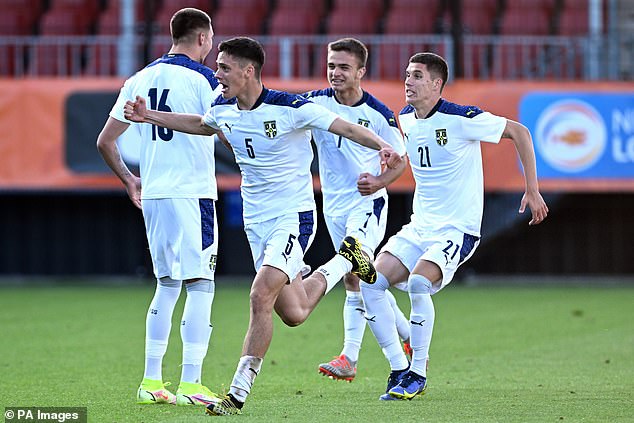 Nice guys DON’T always finish last! Serbia qualify for the U19 Euros (and join England’s group) based on DISCIPLINARY RECORD, with their 10 yellow cards ‘beating’ Ukraine’s 13 – having been level on points, goals and head-to-head records

Serbia have qualified for this summer’s Under 19 European Championship on the unusual account of having a better disciplinary record than Ukraine, after the two couldn’t be split in their qualifying group.

The two teams were inseparable in their qualification Group 6 for the tournament – finishing level on points with seven apiece from their three matches.

When a scenario like this happens, UEFA have a set of 10 criteria points to determine who comes out on top.

The two teams couldn’t be separated by points, goal difference or goals scored in Group 6

And in bizarre quirk, they had to go down to the eighth point to decide who will be paired with England, Israel and Austria in Group B later this month.

Head-to-head records are the first factor in deciding but having drawn 1-1 in their only match that negated that fact.

With no penalty shootouts involved in qualifying (point seven) it came down to who had the better disciplinary record.

UEFA calculate disciplinary points as a red card equals three, one point for a yellow card. If a player is to get sent off on the account of two bookable offences that is also three points.

And on the account of this, Serbia accumulated 10 points (all yellow cards) – three fewer than Ukraine (all 13 points were from bookings too) to finish as Group 6 winners from the Elite round of qualification.

This year’s U19 Euros takes place in Slovakia across June 18-July 1.

Serbia begin their campaign against Israel (June 19), before facing England three days later (June 22). They conclude their group against Austria on June 25.

The knockout stages, should Serbia progress, begin the following week with the final in Trnava on July 1.

In the qualifying round and elite round, teams are ranked according to points and if tied on points, the following tiebreaking criteria are applied, in the order given, to determine the rankings…