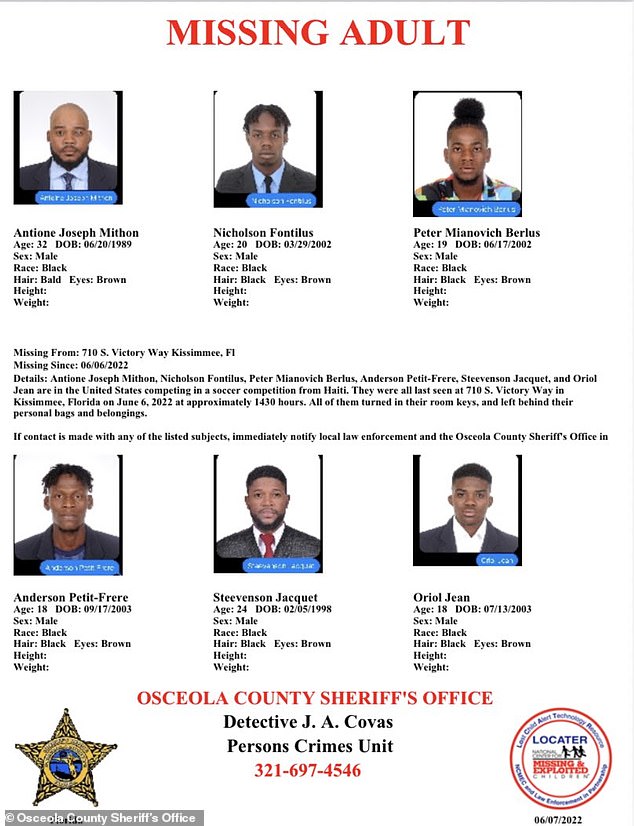 By Andrea Cavallier For Dailymail.Com

The Osceola County Sheriff’s Office said foul play is not suspected but an urgent search is underway.

The six missing members of the team were last seen on June 6. They had turned in their room keys and left their belongings behind, the sheriff’s office said.

The missing adults include five of whom are not Special Olympics athletes and one who is an adult with an intellectual disability, according to a statement from the Special Olympics USA Games.

The adults were last seen around 2.30pm on June 8 at 710 S Victory Way in Kissimmee, Florida, which is near the ESPN Wide World of Sports Complex where the games are being held.

‘The well-being of these delegates is our foremost concern,’ Special Olympics USA Games said in a statement. ‘Local authorities have indicated they have no reason to believe the health and safety of any of the individuals is at risk. To expand the reach and effectiveness of law enforcement’s efforts to locate these individuals, they have been reported as missing persons.’

The Special Olympics began on June 5 and are scheduled to last through June 12.

The OCSO said in a release that it is working with Walt Disney World, the Special Olympics and federal partners to search for the missing team members.

‘At this time, we believe this is an isolated event and do not suspect foul play,’ according to the release.

The OCSO is asking anyone with information on their whereabouts to contact the Persons Crimes Unit at (321) 697-4546.

A team photo was posted to Facebook while they were in Orlando, Florida competing in the Special Olympics USA Games