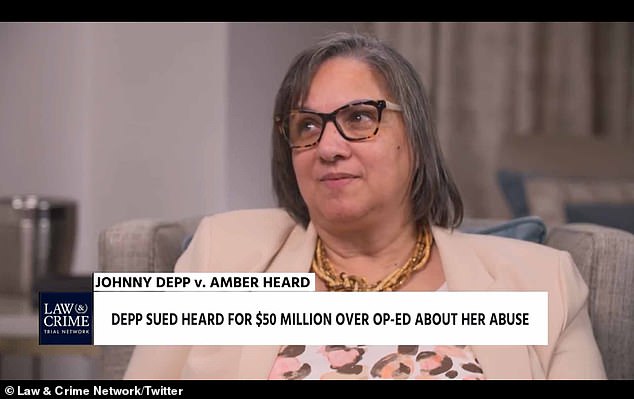 The court stenographer for the Johnny Depp libel case against Amber Heard has said jurors forced to sit through hours of video depositions would often doze off.

Judy Bellinger revealed what she observed about the jury in the blockbuster defamation battle over the last few weeks.

But it came as she was accused of bias after a photograph emerged of her laughing with the Pirates actor after testimony was over.

After less than three days of deliberation, the jury ruled in favor of all three of Depp’s defamation claims against Heard, finding that she had falsely accused him of domestic abuse.

The lightning-fast verdict came at the culmination of the six-week trial that was the OJ Simpson case for Generation Z: a spectacle that was chopped up and replayed on TikTok in clips that were viewed tens of millions of times.

Scroll Down For Video:

Bellinger, who transcribed the lengthy trial, said the jury was listening ‘very intently’ throughout the trial (pictured smiling at Depp)

It was the second time the former husband and wife squared off in court: Depp lost a libel case against a British newspaper at the High Court in London in 2020 where a judge ruled it was ‘substantially true’ he was a wife beater.

Bellinger, a stenographer for the private firm Planet Depos who transcribed the lengthy trial, told Law and Crime that the jury was listening ‘very intently’ throughout the trial.

Bellinger said when the jury was chosen it was known that some would end up being alternates and not decide on the verdict and that she knew who the alternates names were from the start.

But she said she could not remember the alternate’s numbers and throughout the six-week trial one juror in particular stood out to her as the ‘best juror’ because of how attentive she was.

In the end, that juror ended up being one of the alternatives chosen at the start of the trial.

‘Unfortunately the one alternate that was on there, she was probably the one that listened the most,’ Bellinger said. ‘I watched her facial expressions, she was deeply into every word that was being said and I thought she would have made a great juror and she did not get to see it to the end.’

Over six weeks at the court in Fairfax, Virginia, Depp called 38 witnesses while Heard called 24. Depp and Heard met on the set of the 2011 movie The Rum Diary, turning up on the red carpet together for its London premiere in 2011

Bellinger recalled the juror’s exasperated reaction to finding out she was an alternate and said she felt similarly.

‘I was like oh man! she was going to be the best juror!’ she said.

Bellinger said that the alternate juror also stood out to her because unlike the others, she never fell asleep.

‘There were a few jurors dozing off,’ Bellinger said. ‘She never dozed off’

She said that jurors from both rows would fade away at times,  imitating the jurors with their hands holding up their head and their eyes closing as they sat through hours of deposition.

‘It was tough because there was a lot of video deposition. They’d just sit there and all of a sudden I’d see their head drop,’ she said.

Her interview came after video of Bellinger hugging Depp on the final day of the trial was released.

Bellinger denied claims that she ‘partied’ with Depp and his legal team and told Law and Crime that Depp had requested to meet her after she arranged to pick up her equipment to transcribe the case from the actor’s attorney Ben Chew.

She said she ended up meeting at the hotel Depp’s team was staying at where she met Depp in a hospitality room following the end of the trial.

‘Johnny was in there, and so I had to go in there and get my equipment, and I saw him, and they’re like ‘he really wants to meet you” Bellinger said. ‘I was probably in there for less than 10 minutes, and he just hugged me and thanked me again. And I hugged a couple of other people there, and I got my equipment and I came out, left, and went home.’

Supporters of Amber Heard said the footage of Bellinger hugging Depp was proof that she was not impartial.

There are also pictures of Bellinger smiling at Depp in court that were widely shared.

Both Depp and Heard gave evidence for four days each including a forensic cross examination from the opposition lawyers .

The jury saw dozens of texts, photos, videos, medical records and even pages from the former couple’s ‘Love Journal’ they hand wrote to each other.

The libel case was so complicated that the verdict sheet had 42 questions the jury had to answer before delivering the verdict: 24 questions for Depp’s claims and 18 for Heard’s counterclaim.

The jury ended up ruling in favor of all three of Depp’s defamation claims against Heard and was awarded $15million – $10million in compensation and $5million in punitive damages.

Heard won just one of her three countersuit claims, which related to statements made by Depp’s lawyer suggesting she and friends had trashed their apartment before calling the police out.

She was awarded $2million in compensatory damages out of the $100million she was seeking in her countersuit against her ex-husband and received zero dollars in punitive damages.