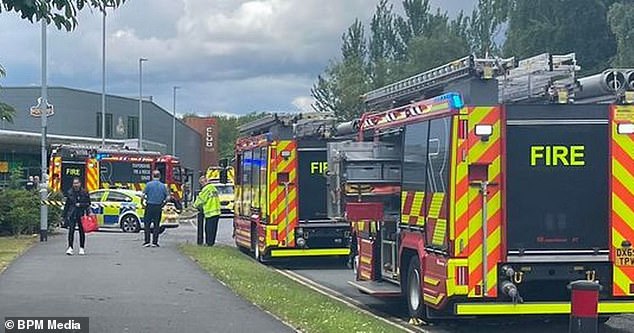 One of the UK’s largest indoor water parks was evacuated with a man and woman taken to hospital and a further 46 people treated by ambulance staff after suffering ‘eye and throat irritation’ and ‘nausea’.

Emergency services rushed to Waterworld in Stoke-on-Trent along with ‘specialist resources’ earlier today, where 110 visitors were evacuated with the symptoms.

Two ambulances, Hazardous Area Response Team (HART) paramedics, four paramedic officers, a BASICS emergency doctor and the Midlands Air Ambulance from Cosford with a doctor and critical care paramedic on board all attended the scene.

A spokesperson for West Midlands Ambulance Service said: ‘Waterworld was evacuated after a number of people inside began displaying minor symptoms including watery eyes, a runny nose and nausea.

‘A total of 110 people evacuated from the building who were displaying symptoms were rapidly triaged by the team of ambulance medics.

‘Once triaged, 46 out of the 110 people received treatment by ambulance staff on scene before being discharged. A man and a woman were conveyed to hospital for further checks as a precaution.

NEWS: We have a number of ambulances & specialist resources at Waterworld, Stoke-on-Trent with @StaffsFire @StaffsPolice.

We’re assessing a number of people who report feeling unwell. Please avoid the area to allow 999 staff to deal with the incident. More to follow. pic.twitter.com/XVAygQFUAA

‘This was a well-managed tri-service response which saw the safe and speedy evacuation of a large number of people. Thankfully no one involved was in a serious condition.’

An investigation into what caused the incident is ongoing.

Police also attended the water park, tweeting earlier today that the building had been evacuated as precautionary measure.

A police spokesman said: ‘We are currently in attendance at Waterworld, on Festival Way. Colleagues from Staffordshire Fire and Rescue Service and paramedics are also at the scene following reports of a number of visitors feeling unwell.

‘Visitors have reported eye and throat irritation and nausea.

‘The building has been evacuated as a precaution. The emergency services have the incident in hand and urge members of the public to avoid the area. We thank you for your patience and understanding at this time.’

Evacuated visitors have been pictured stood in their swimwear outside the building, with many wrapped in towels to keep warm.

Up to eight ambulances and three fire engines, as well as police have been seen outside.

One eye-witness said an air ambulance has landed behind the Best Western Plus hotel, according to Staffordshire Live.

West Midland Ambulance Service said a ‘number of people’ were being assessed and asked members of the public to avoid the area.

In a tweet, the ambulance service said: ‘We have a number of ambulances & specialist resources at Waterworld, Stoke-on-Trent with @StaffsFire @StaffsPolice.

‘We’re assessing a number of people who report feeling unwell. Please avoid the area to allow 999 staff to deal with the incident.’