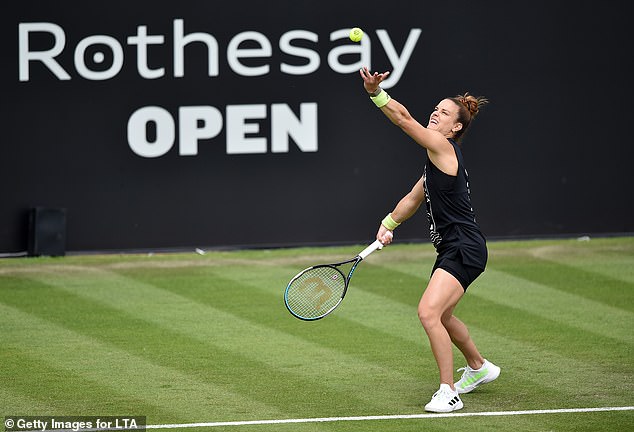 World No 5 Maria Sakkari has revealed she does not think 19-year-old Emma Raducanu gets the credit she deserves.

US Open Champion Raducanu is set to complete only her first year on the WTA Tour, despite having already won a major at just 18 years of age, back in September.

Sakkari’s comments came ahead of her Nottingham Open first round match, after Raducanu retired injured in her opener as players prepare for the grass court season.

Nottingham top seed Sakkari, 26, said: ‘I don’t really know her that well, but people don’t give enough credit to her. She has been playing good.

‘It is not easy, if you exclude the US Open, she is 19. It takes time. The level at WTA is very, very high, so it is going to take time for her and every young player just to get used to the level.

‘She had a three-week tournament in New York and I think now what she is doing is the right thing.

Raducanu, 19, has struggled with injuries after becoming the first qualifier to win a Grand Slam

Raducanu has come under criticism at times since joining the Tour as she has struggled with her fitness, and the Nottingham Open is the latest tournament she has had to retire from with injury.

She has also found it hard to compete with the more seasoned pros, and her lack of consistency has lead many to question whether she can replicate her US Open heroics.

The British No 1 announced herself on the scene last summer by reaching the fourth round of Wimbledon in impressive fashion, before retiring due to illness.

But the crowning moment of her fledgling career came just a few months later when she stunned the sporting world to become the first qualifier to win a major tournament.

However, she has found it tough to compete in her first year as she navigates the WTA Tour for the first time in her career.

The physical demands of such a congested schedule have definitely taken their toll on the 19-year-old as her body learns to cope with the strain of the tour and she has suffered numerous injuries in the past 12 months.

Her latest injury – suffered half an hour into her opening match at the Nottingham Open yesterday against Swiss Viktorija Golubic – has left question marks over  whether she will be able to play in front of the home crowd at Wimbledon for the first time since her dramatic victory at Flushing Meadows.

On top of that Raducanu finds herself thrust into the limelight at such a young age, meaning as well as the matter of negotiating her first year on the Tour, she has also got to deal with the pressures of becoming an overnight phenomenon.

However, Sakkari revealed that her WTA rival is not alone in struggling to get used to the demands of the year-round Tour.

Sakkari added: ‘It took me a lot of time because my breakthrough was later than other players. Everyone has different times to break through.

‘For me it was two or three years until I got used to the Tour – it always takes time.’