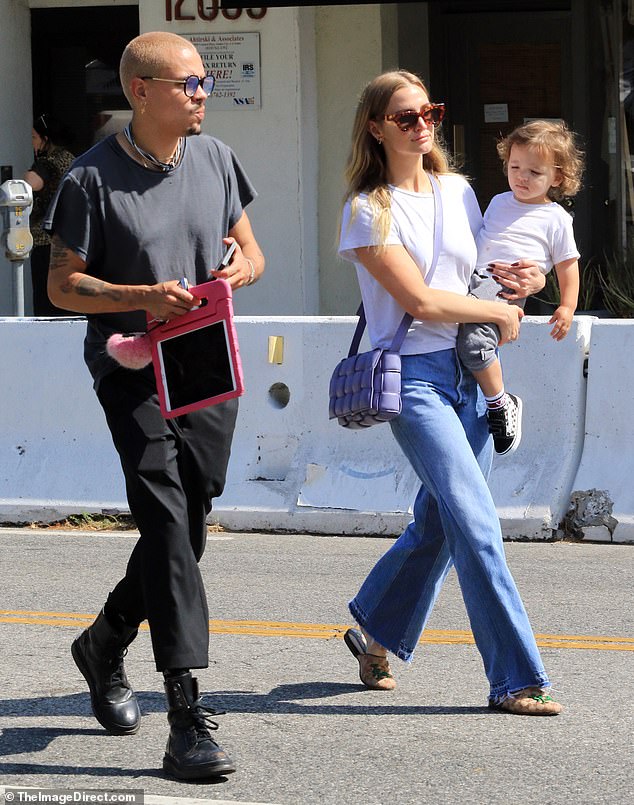 Ashlee Simpson was spotted out and about in Los Angeles on Wednesday afternoon alongside her husband Evan Ross.

The two stepped out from the hot sun to savor a quick lunch with their one-year-old son, Ziggy Blu Ross.

The married couple of eight years pulled off fashionable yet casual outfits during their family outing.

Stylish family: Ashlee Simpson, her husband Evan Ross and their son, Ziggy, were seen in LA for a quick lunch on Wednesday

The mom of three wore a pair of comfy jeans with a white, short-sleeved T-shirt.

The singer donned some Gucci sandals and a lavender cross-strapped purse to add a fashionable edge to the look.

The 37-year-old wore a pair of large sunglasses and accessorized the outfit with small, hooped earrings.

Her blonde hair was parted in the middle and fell down naturally past her shoulders. The singer held Ziggy Blu in her arms as they crossed the street.

Cute: The couple looked happy as they crossed the street under the summer sun in Los Angeles

Evan Ross, son of famous singer Diana Ross, also kept his look simple and casual. He wore a pair of black combat boots with black pants and a gray t-shirt.

His biggest accessory, however, was the cute pink tablet that he carried in his hand. The device was for meant for their son, Ziggy, to stay entertained during their meal.

All you need is coffee: The Pieces Of Me singer was seen happily sipping a large iced coffee during lunch

Simpson was seen enjoying a large cup of iced coffee with a friend who joined the table.

Evan and Ashlee married in 2014, and have two children together, a daughter, Jagger, and son, Ziggy. She has another son, Bronx, whom she shares with her previous husband and lead vocalist for Fall Out Boy, Pete Wentz.

Simpson and Wentz married in 2008, but were divorced shortly after in 2011.

Beautiful family: Simpson has a total of three children, two shared with Evan Ross, and the oldest son shared with her first husband, Pete Wentz

The Pieces Of Me singer appears to have a very close and loving relationship with her family.

Ross said he knew from the very beginning that Ashlee was the one for him way before they were married.

In an interview with Us Magazine before the two were even engaged, Ross stated, ‘I’m so in love and we’ve got amazing things going on. And we inspire each other.’

After the big question of, ‘Could she be the one?’, the 33-year-old musician had just a very simple answer of, ‘Yeah, she’s the one.’

Love forever: The two stars have been married for a total of eight years and appear to be completely in love and happy