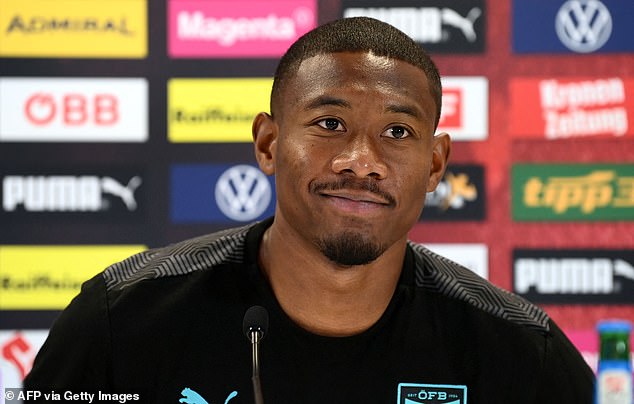 David Alaba has hit out at Manchester United for not giving ‘world class’ Ralf Rangnick enough time to make an impact at the club.

Rangnick took charge of United in November after Ole Gunnar Solskjaer was sacked and was due to step up to a consultancy role when a permanent boss was hired.

However, after a disappointing campaign with the Red Devils during the 2021-2022 season, it was mutually agreed that Rangnick would part ways with the club.

Alaba thinks United were at fault for Rangnick’s failure – praising the German manager for ‘knowing a lot about football’ and having a ‘really good plan’ ahead of his United tenure.

Rangnick has since taken over as the Austria head coach and spearheaded his first game in charge on June 3 when his side cruised to victory in Croatia.

Speaking about Rangnick’s impact on the national team and United’s loss, Alaba told The Athletic: ‘He [Rangnick] has been really good, you can see we have a really good plan and you can see it works for us on the pitch.

‘He doesn’t want us to let the opponents breathe air. It is good for us. I have known Ralf since I was 18 years old and he is a world-class coach.

‘What he did in the past is something special and now I am seeing it close up. He showed what he can do at Leipzig, Salzburg and Hoffenheim.

‘He didn’t have a lot of time in Manchester. He has a really good plan and knows a lot about football.’

Meanwhile, Rangnick criticised United’s ‘physicality’ and admitted they never got close to ‘that aggressive, pro-active football’ he likes to utilise.

Rangnick criticised United’s ‘physicality’ and admitted they never got close to ‘that aggressive, pro-active football’ he likes to utilise under his tenure

Rangnick admitted after his departure: ‘We never came near to that aggressive, pro-active football I’d normally want to do. It has to do with physicality if you want to play like that. I should have done better and developed this team in a more sustainable way.

‘I am not blaming Cristiano at all, he did great in games, but he is not a pressing monster. Even when he was young, he wasn’t shouting, “The other team has the ball, where can we win balls?”

‘It was the same with quite a few other players so we had to make compromises at one stage. We never found the right balance between what do we need with the ball and without the ball.’