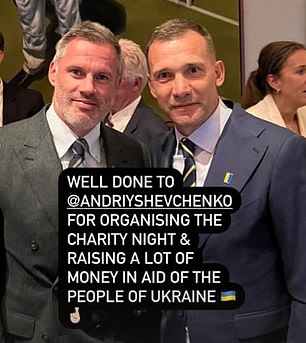 Jamie Carragher and John Terry congratulated Andriy Shevchenko on an ‘amazing night’ after attending the Ukrainian’s charity auction at Lord’s on Wednesday.

The former Chelsea and AC Milan forward is an ambassador to the Sport4Peace Humanitarian Fund and hopes to raise £2 million in support of sufferers in Ukraine.

Held in Lord’s Long Room, the special auction asked the guests – including Carragher and Terry – to bid on prizes donated from across the world of sport.

These auction items included a luxury VIP Champions League match experience, signed shirts from Lionel Messi, Kylian Mbappe and Neymar and a private box at Ed Sheeran’s Wembley concert at the end of the month.

According to the Sport4Peace website, over £250,000 was raised from the live auction alone, excluding any additional donations.

All proceeds were split between four charities to provide food, shelter and safety to the people of Ukraine, following Russia’s invasion of the country earlier this year.

On the night, the former Ukraine captain told Sky Sports: ‘I am very grateful for people to come tonight and support this event.

‘I know how much this means for my country, especially in this moment. It’s probably the most difficult time in our history.

‘It was nice for all the people to support this event – for my friends to come and also to support – it’s a very special event for me.’

Carragher and Terry each took to Instagram to show their support, with the former Chelsea defender describing the event as an ‘amazing night’.

Terry and Shevchenko played at Stamford Bridge for three years between 2006 and 2009 before the Ukrainian returned to Dynamo Kyiv.

Shevchenko’s former team-mate Petr Cech and ex-Arsenal midfielder Mesut Ozil are among other sports stars to support the Sport4Peace initiative.